Places of learning must be many things to many people. Educators need a teaching environment that will support creativity and engage students. Administrators need a building that will represent the institution well, connect with the community and inspire financial support. When architects set out to design a new school or university building, stakeholder involvement is an important part of the process.

One of the most important constituents, however, is often left out of the design process — students.

“Sometimes, if architects aren’t intentional about including them, students can become a forgotten stakeholder,” FSB Principal Fred Schmidt said. “Giving students a voice in the design process can bring them a sense of ownership and pride for the completed project.”

Working with administrators, FSB identified a student leadership group within the college. During the early stage of the design process, the firm attended one of the group’s meetings in order to learn from the students about priorities and hopes for their college’s future undergraduate lab. Schmidt said FSB led the students in an empathy exercise, asking them to imagine what other people will see, say, hear, think and feel when they step into the completed building. Students wrote their answers on sticky notes — people will see teams collaborating, people will think OSU engineering is on the rise, people will feel that the building is a home away from home.

“It was an interesting exercise,” Schmidt said. “Asking students to imagine others experiencing the completed project is a good way to flesh out what they hope the building will be.”

After a successful session with the CEAT student leadership group, FSB opened up the empathy exercise to every student in the college by hosting an event and offering pizza in exchange for input.

“We take the key ideas, the overarching themes, and we’ll look at incorporating those into the design and flow of the spaces, or the relationships of the spaces,” Schmidt said.

“Some of the feedback is looser, for example, ‘We want it to be exciting.’ Sometimes we’ll solicit some more discussion with the students, like, ‘What would an exciting classroom mean to you?’ Exciting is a feeling, so it’s our job to translate that feeling into a design statement.”

Construction is expected to be complete by 2018. Schmidt said he looks forward to the day when students can go to learn in a building with a design they or their peers helped to influence and shape.

Architects go back to school for a modern student perspective
Heartland Middle School’s first group of students began their school year in Fall 2016. When they enlisted FSB’s design services, Edmond Public Schools expressed its hope for Heartland to set the standard for the next generation of middle schools in the district, so FSB intentionally incorporated a modern student perspective into their design. 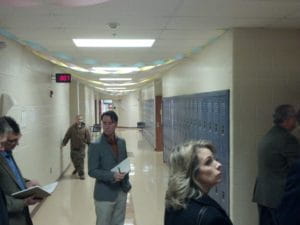 Typically, on a new school, the architect and even the district does not know who the students are yet, Schmidt said. However, FSB placed a high value on student input, and Edmond Public Schools embraced the priority. Early in the design process FSB arranged peer institution tours and used them as an opportunity to learn from middle schoolers at existing, recently constructed middle schools. Schmidt said principals at peer institutions were typically very accommodating of FSB and Edmond Public Schools, assigning student ambassadors to guide the group though their new school.

“During our tours, we had the opportunity to ask students some general questions, like, ‘How do you like your new school?’” Schmidt said. “Then we asked them about some specific places, for example ‘How does the lunchroom work?’ or ‘How do you like the media center?’ You get a whole different perspective with those students. They see stuff that we don’t see, that their teachers don’t see and that principals don’t see.”

Schmidt said information gathered during the tours led by student ambassadors helped Edmond Public Schools stakeholders to understand and communicate their priorities for the project, and influenced Heartland’s design. The finished product includes some of best aspects from other modern middle schools, combined and expanded upon to meet the needs and aspirations laid out by Edmond Public Schools educators and administrators. 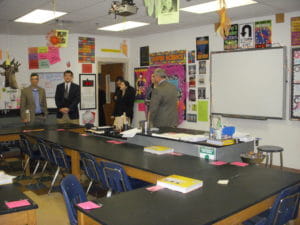 The tours were at times a two-way learning experience, with FSB architects and engineers learning from students about their experience and school building, and middle school students witnessing part of the design process firsthand.