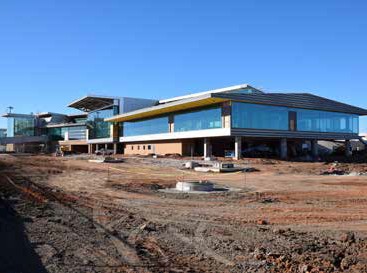 As officials at Will Rogers World Airport work through an unprecedented decline in air travel at the same time they are implementing a significant terminal expansion, editors of The POINT! reached out to Mark Kranenburg, Oklahoma City’s Director of Airports, to get some insight on what is next for the region’s largest airport.

Q. This expansion was contemplated as part of the airport’s long-range plan developed more than 20 years ago. What are the goals of the work you are doing now?
A. Our planning progress started in 1999 and this is the third phase of that work. This project really builds on the second phase we completed in 2006 that was mainly a functional and aesthetic improvement, but only netted one new gate. The goals of this expansion and renovation project are constructing four new gates that will be the beginning of an east concourse consisting of ultimately nine gates (the other gates to be built on demand); construction of a larger, more functional security checkpoint; and new concessions. We’ve dramatically improved public circulation with a large open space lobby prior to entering security, and a double-volume space we call the atrium when you come out of security, large meeter/greeter lobbies, and a 4,200 square foot mezzanine level where non-ticketed visitors will have 180-degree views of the airfield while they see off family and friends or wait for arriving passengers. The new concourse is 30-feet wider than the west concourse and includes a nursery, a second pet relief area and new expanded restrooms. In total, we are adding 136,000 square feet of new space
and renovating another 21,000 square feet.

Q. How is the work progressing and when will people start to see the changes?
A. The expansion is on track to be complete later this summer. The areas of renovation will continue after we open the new space. We also have an apron paving project going on at the same time, so we are at a point in the project where we are threading the needle so that as construction is complete in the new space, the paving project has to be complete before we can set the new passenger loading bridges, and then also outfitting the new spaces with furniture and other equipment. I give credit to the design team, Frankfurt-Short-Bruza Associates; the contractor, Timberlake Construction; and the paving contractor, Duit Construction, who are working to pull all this together. And of course, our airport team who is involved every step of the way.

Q. What can we expect with the rollout to be on the new concessions? 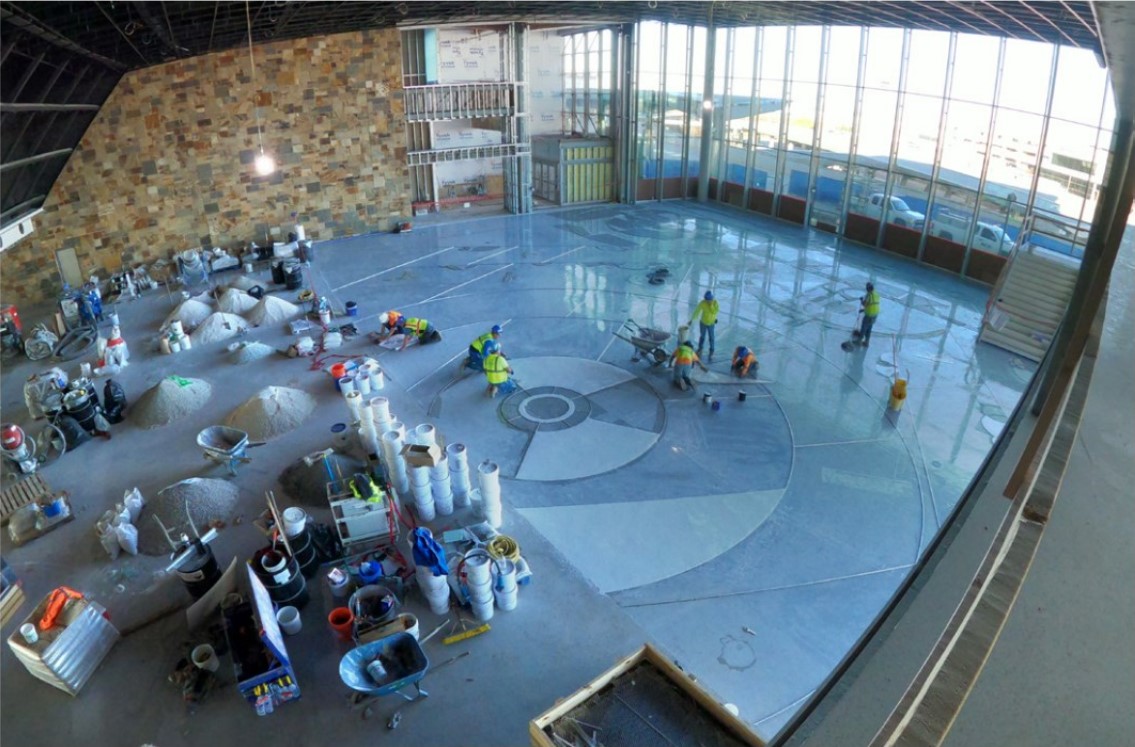 A. First, I want to say how incredibly fortunate we are to have the partner we have in Paradies Lagardere. The airline and airport industry and really the entire travel and hospitality industry have been devastated by the pandemic. When air travel stopped suddenly in March 2020, most terminal concessionaires put on the brakes and were wary of entering into new contracts with so much in doubt as to when air travel would recover. Airport staff and Paradies were committed to a process that would help build back the concession program over the next couple of years. Paradies is very familiar with the progress Oklahoma City has made over the  last 20 years or so and they have confidence in OKC. It was that confidence in OKC and the long-standing relationship we have had with Paradies that led them to sign a contract with us and agree to be a partner as we build back this business. And Paradies did a great job partnering with local restaurants and retail stores to have a presence in the airport. We had a record numbers of passengers in 2018, and then bested that by 10% in 2019. Our daily traffic through the terminal was running between 5000 and 7000 passengers a day, depending on the day and the season, before the pandemic. Those numbers dropped to a low of 239 passengers one day in April. We have steadily climbed back to around 50% of our 2019 numbers and have stayed there the past six months or so. So, we have staggered the start of new concessions as passenger numbers grow. We just cannot support 20 food and beverage and retail offerings with these low numbers. So over time we will build back the business. Currently, in the terminal we started with a new concept called Tuk Tuk Go which is a grab-n-go operation and we have two full-service bar/grills open in the concourse, The Grill at OKC and OKC Flight Cantina. The next two outlets to open this summer are Trip Advisor, a travel essential store, and Vino Volo Craft, a sit-down restaurant/bar showcasing both wines and craft beers. This fall we will add Starbucks, which is an amenity we had high demand for from our local customers. People are used to seeing Starbucks in other airports, but our Starbucks is going to be much larger than a typical airport location. After that, Freddy’s Steakburgers will be the first restaurant to reopen in the food court. As passenger numbers return, we will gradually roll out the remainder of the food and beverage program, which includes Elemental Coffee Café, the popular community-driven, small-batch roastery and café that will be located pre-security; Hatch, Oklahoma City’s next-level breakfast destination; Osteria, a restaurant and craft bar dedicated to classic Italian cuisine; and Tropical Smoothie Café, which will serve incredible smoothies and wholesome food options in the food court. Retail stores that will be added include Plenty Mercantile, the local gift store that champions sustainability and hospitality; Tin Lizzie’s, offering a crafted selection of Oklahoma-owned boutiques, artisans and makers; Oklahoma’s Own News 9 Travel Essentials, showcasing the iconic KWTV News 9; Corsa featuring Brighton and SPANX, offering top fashion and accessories for any traveler; and iStore Express, the quick stop for the best tech accessories on the market.

Q. Aside from the expanded space and the new concessions, what else can people look forward to with the expansion?
A. I think the art projects in the new space are really going to wow everyone. Matt Goad, a local artist, was selected for this project. The work is seen in the terrazzo floor and on a large glass wall in the atrium area as you pass through security. The terrazzo design connects past to present, present into the future, and earth to sky. The artistic goal for the lobby entry creates a timeless narrative that guides the traveler through the space in a way that tells the story of Oklahoma City and is at the same time calming for passengers. Once you leave security and enter the large atrium that again welcomes visitors, the art provides a sense of place and celebrates our city. And the terrazzo art further extends into the new gate areas. You will not be able to walk more than a few feet without being able to enjoy terrazzo art in some way. The curtain wall of opaque glass in the atrium is filled with international weather symbols. It is interesting and educational and beautiful all at the same time. The artist really did a remarkable job with the project and I cannot wait for people to see how it changes the space. 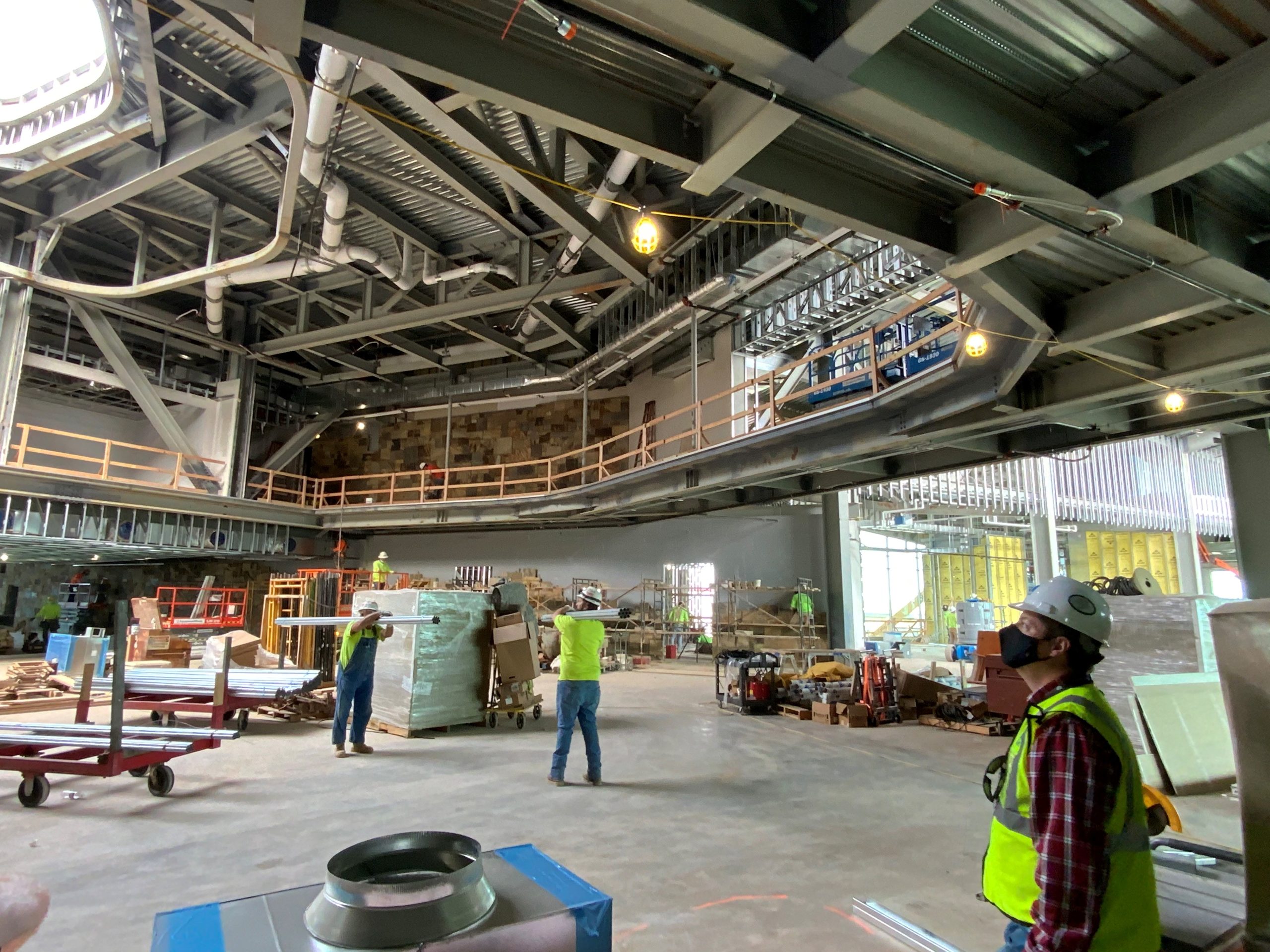 Q. So how is the business of the airport going in the pandemic and how do you see things coming back?
A. There is such a parallel between the health and growth of the economy and aviation. The two are inextricably linked. Travel today is mainly leisure travel with family and friends with some business travel. I think we will get back to greater business travel over the next year or so. For me, what is tragic is that over the past five years we had recruited a significant amount of new non-stop destinations. We had air service to several locations on the east and west coast and other major markets such as Washington, D.C. We hit every target on our list and were searching for new markets when the pandemic hit. Most airlines kept limited service in OKC, but numerous other markets were suspended and still are. But we are seeing signs of life. American Airlines is planning to restore Ronald Reagan Washington National Airport and Los Angeles Airport in April, but other airlines are still being very surgical, adding a flight here and taking away service there. Today, OKC is averaging 50 to 55% passenger numbers compared to the same month the year before. Airline hub airports are still busy but airlines have eliminated a lot of point-to-point service from smaller markets. It will be a slow return, a year or two for sure. The vaccine is a huge lift, and we anticipate seeing more people traveling as vaccines roll out. People want to travel. Airlines and airports are doing a great job in making it as safe as possible be for the traveler.