One of the best people-watching spots in Oklahoma City has to be the Edward L. Gaylord Downtown YMCA. 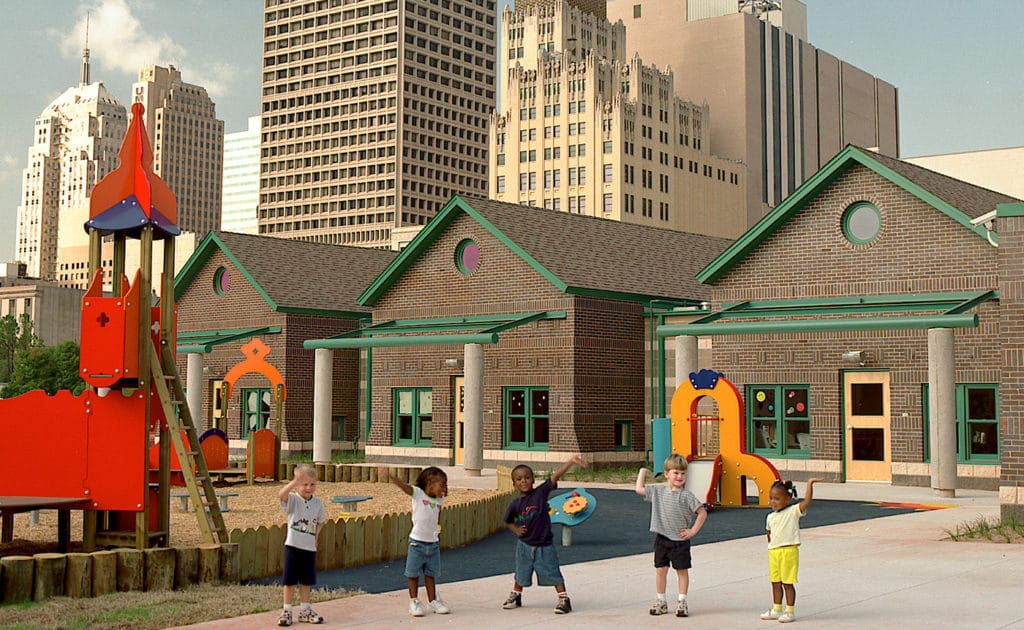 You’re likely to see just about anyone there, including policymakers, CEOs and average Joes – and Flaming Lips frontman Wayne Coyne’s nephew checks people in at the front desk. The building is a bustling hub of activity day and night as people come in droves to work out, swim, run, play basketball and take yoga classes. Copious natural light spills throughout the center’s large transparent open spaces and a gymnasium with an elevated running track is lit by a huge skylight.

The spot has become a gathering place in downtown where adults work out and children across a courtyard in the child development center learn and grow together. The fitness building was completed in 1999 in conjunction with a project that included renovation of the old OPUBCO building at 500 N. Broadway Ave.

Fred Schmidt, principal and partner with the architectural and engineering firm Frankfurt-Short-Bruza Associates, was already involved in the renovation of the historic newspaper building when tragedy struck. The bombing of the Alfred P. Murrah federal building in 1995 not only destroyed that building, but also damaged others, including the nearby Downtown YMCA. The Gaylord family, the owners of OPUBCO, donated the newspaper building and the rest of the block to the east of that building for a new YMCA.

An existing building was torn down and work began in the late 1990s on a new YMCA and a child development center. The YMCA and the architects sought input from members, and potential members, on the look and feel of the fitness building.

“That feedback defined the project,” Schmidt said. Schmidt said the design is unique and cutting-edge for a YMCA. “A lot of people are really impressed,” he said. “They walk in and say ‘is this a YMCA?’”

The 37,000-square-foot fitness center was built for $5.1 million. It looks east and faces the $1.3 million child development center completed in late 1998. When it came time Schmidt and his team knew they had to design something special, knowing what the child development center was replacing. “It was pretty emotional because it was tied to the worst disaster Oklahoma City has ever seen,” he said.

The final product has a residential feel with each classroom set up as a house complete with a gabled porch and two pillars of Oklahoma cedar at each door. Ceiling tiles in the hallways are cut into cloud patterns and many windows are lowered so that children do not have to crane their necks for a look outside. All of the connected rooms open onto a central playground.

The goal of the project was to look toward a bright future, create a gathering spot downtown, and not focus on the tragic events that brought about the new buildings in downtown Oklahoma City.

“This was a brand-new start,” Schmidt said.