PONCA CITY – From its similarities to an old-fashioned oil can, Carla O’Neill suspects some people may hesitate before stepping through the 35-foot-tall cylinder to enter Ponca City’s Conoco Museum. Their imaginations just don’t think big enough. 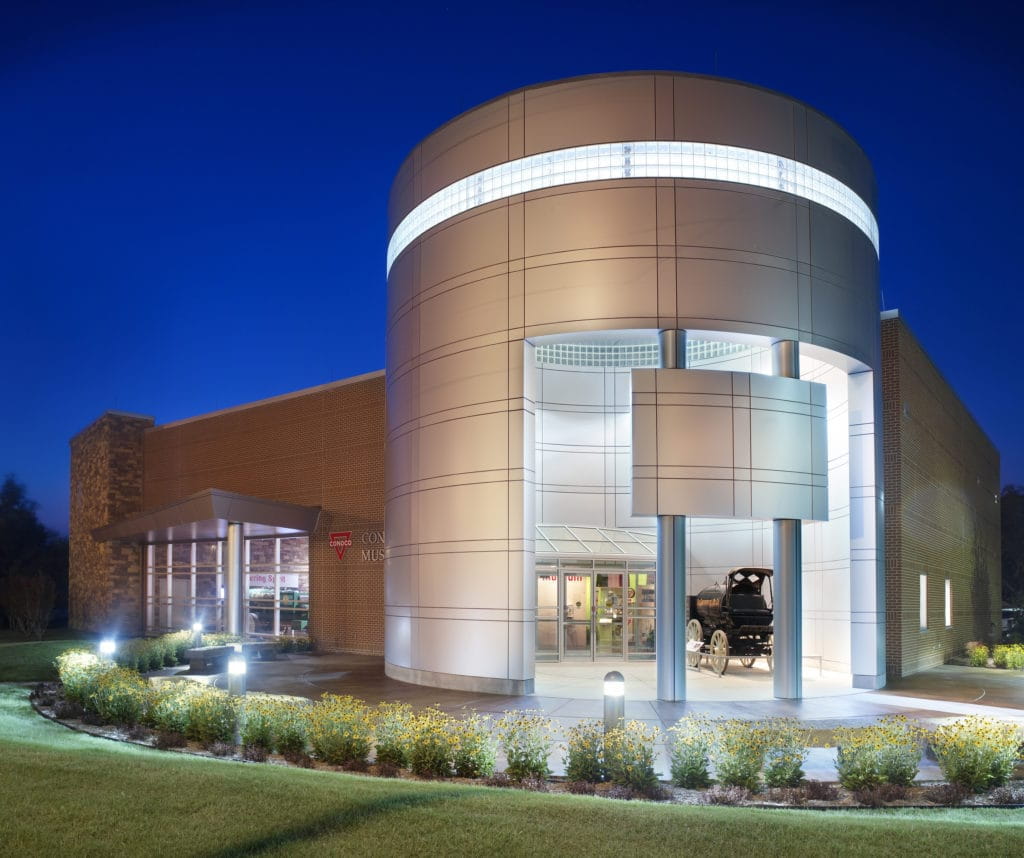 “The entry was kind of an abstraction of the Conoco cylindrical petroleum tanks that are directly across the street to the south,” said FSB Senior Design Project Manager John Osborne, who oversaw the 9,000-square-foot museum project. 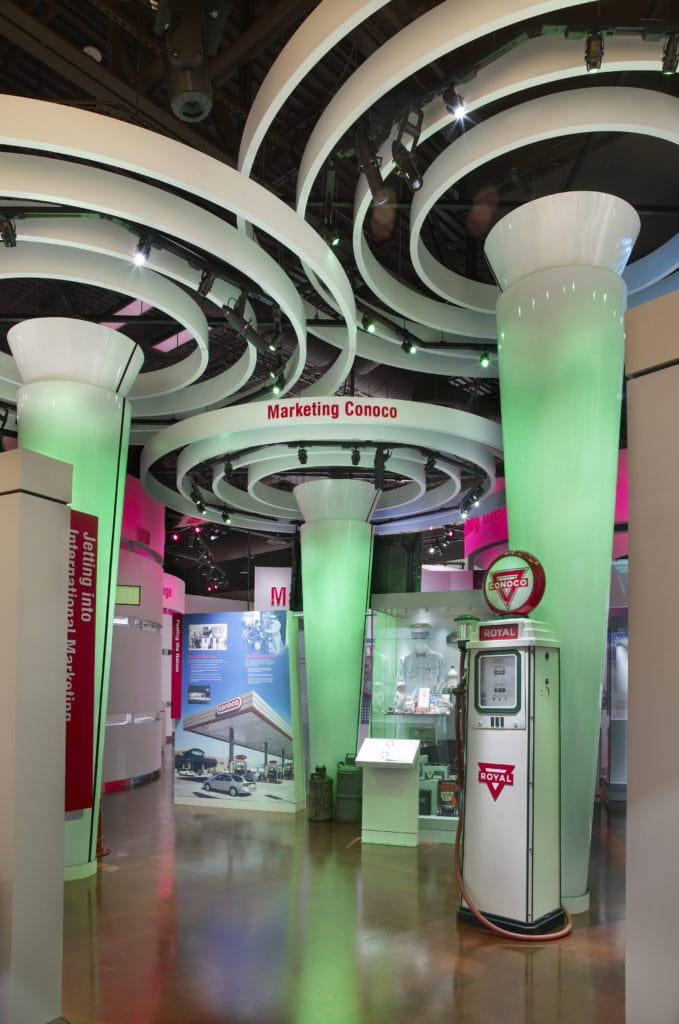 That $5 million effort put Osborne in a team with the honored British museum exhibit designers Bill Haley and Haley Sharpe, whose firm Haley Sharpe Design also worked on the Oklahoma History Center.  Together the designers used the Ponca City building structure for symbolic references to Conoco’s history. The shiny metal and glass entrance, lighted glass blocks in the corners, circular sidewalk and eye-popping interior graphics provide both a contemporary and futuristic atmosphere meant to convey Conoco’s long use of cutting-edge technologies. The traditional brick and stone walls parallel older surrounding structures, links to the company’s proud past as both Conoco and Marathon Oil.  Built over a utility easement, the Conoco Museum required a removable rear canopy that presented both regulatory and design challenges. But since the building is dominated by 7,000 square feet of open space, primarily meant for static exhibits, Frankfort Short Bruza’s role involved many technical elements dependent on Haley Sharpe’s product demands. Still, Osborne enjoyed the project.  “They came at it with a slightly different tack on design,” Osborne said of Haley Sharpe. “It was just a fun, unique experience.”

O’Neill, who manages the museum, said the design team did a remarkable job of maximizing their resources.  “The building does not look large from the outside, but because of the setup and the circular flow, we were able to cover so many areas,” she said. “There’s not very many 90-degree corners. It’s very curved. It’s not completely curved to make people dizzy, but there’s a definite flow to it so that when people come in they are pleasantly surprised at the depth of the displays.”

That starts once visitors step through that petroleum tank entryway to encounter a curved wall covered with graphics. “The first thing people see tells a story, and opens you up to the rest of the museum,” she said.  With 3,000 artifacts on display, O’Neill said many people find themselves needing a second visit to take it all in.  “All this was printed in England and had to be shipped over by boat because it was too heavy to ship any other way,” she said.

Haley Sharpe also sent their own installation team to make the audio-visual displays work just right.  “It’s fabulous,” she said. “This museum far exceeds the expectations of everybody who comes in. I can say that truly, without a doubt.”

The project started three years ago, when ConocoPhillips decided to celebrate Oklahoma’s centennial by giving the state two free museums, one telling the story of Conoco, the other detailing the history of Phillips Petroleum. Both opened in 2007, the Bartlesville gift taking up shop in a former Arvest Bank location, while the Ponca City depository opened in the structure built by hometown contractor Rick Scott Construction.

Jim Mulva, ConocoPhillips chairman and chief executive officer, said the museums reaffirmed the Houston company’s Oklahoma roots. With one full-time employee and a few part-times, the Conoco Museum recorded 15,000 visitors its first year, operating on a $500,000 budget. “The entire design is meant to showcase quality,” said O’Neill. “I think it’s a very inviting place. And with the landscaping, it makes it kind of pretty.”