Nearly a century in the making, the Oklahoma City Capitol finally gets its dome. 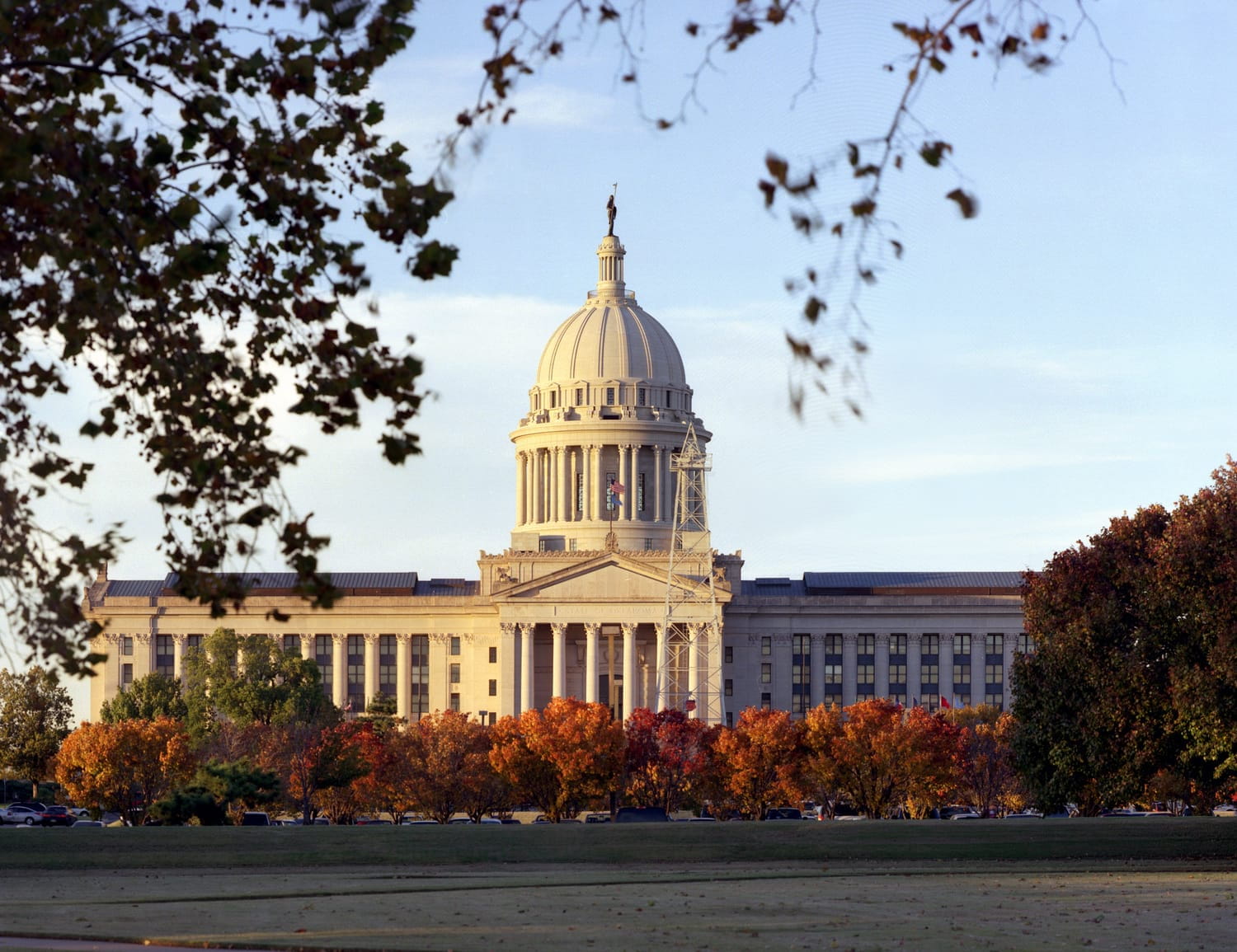 Trying to piece together a dome on top of a building is a lot like putting pieces of pie back into a pan: The task starts out relatively easy, but becomes progressively harder as the structure takes shape. “It’s not the first piece that bothers you – it’s the last one,” says John Jamison, project executive at Oklahoma City-based Manhattan Construction Co.

And Jamison should know. His firm, along with Tulsa, Okla.-based Flintco, came together in a joint venture known as “Capitol Dome Builders” to construct a dome for the Oklahoma State Capitol building. A monumental undertaking, the project required more than 1,200 precast concrete pieces that altogether weighed more than 1,300 tons: The heaviest pieces weighed almost 8 tons. These pieces contributed to what is now an 80 foot-diameter-dome, which projects 157 feet above the existing roof and weighs more than 2,500 tons.

Hoisting the panels 280 feet in the air, then situating them one-eighth of an inch away from one another around the entire circumference of the dome was no easy task, says Jamison, particularly when it came down to the last few pieces. “We didn’t have a saw or jack hammer to get them in place,” he recounts, “so it had to be perfect all the way around, or we knew we’d have a problem in the end.”

Thanks to the controlled environment of manufacturing and curing the panels at a precast plant – Arkansas Precast and Structural Stone LLC, of Jacksonville, Ark. – Jamison says those final moments of completion went without a hitch. Additionally, he says precast ensured flexibility when shaping the dome, durability, speed of construction and precise color matching with the existing structure.

“We put a lot of effort into matching the color of the building – but what color do you put on a building that’s 87 years old?” Jamison asks. “By combining technology with the precast – with its adaptability of colors – we were able to find the right match.”

Dusting It Off
For much of the 20th century Oklahoma’s state capitol operated in an “unfinished” state due to a lack of funding and steel spurred by World War I. Though the capitol itself was completed, the limestone dome with its cast-in-place concrete structure as envisioned by the original architects in 1914 never came to fruition.

That was, until the state dusted off those original plans and decided that the structure should be completed by the state’s centennial in 2007. Six years ago, Frankfurt-Short-Bruza Architects P.C. of Oklahoma City completed a feasibility study for the project and determined that the existing structure could indeed support a dome. At that point, the Oklahoma state legislature approved an act that would allow the project to proceed using a design-build process.

Before construction could begin, the dome would be redesigned to include the latest building materials. “We changed a lot of systems,” says Jamison. Concrete frame and ashlar stone, for example, was changed to precast concrete. The switch helped lighten the structure considerably, says Jamison, and allowed the builders to match the new dome’s colors to the existing limestone-covered building.

Construction began in April 2001 and finished in November 2002, just in time for Oklahoma’s Statehood Day. During that 18-month stint, the capitol remained open and two different legislative sessions proceeded in a “business as usual” fashion. “The building never shut down,” says Jamison.

When the original saucer dome was removed, it left behind a 80-foot-diameter hole in the top of the building, which was sealed by closing off an area of the capitol, then soundproofing it. Additionally, various historic murals and a stained-glass skylight had to be protected from damage during construction.

“Due to these and other factors, we had to build everything up and out,” says Jamison. “This project was about creating a logistical solution: how to get the panels to the top, how to keep the building in operation and make sure that the open hole in the roof remained watertight and secure.”

Precast, Please
Before any precast panels could be installed on the dome, the construction team had to erect a 280-foot-tall freestanding tower crane with a 230-foot boom length. With it, they were able to raise the panels, each of which weighed more than 15,500 pounds, and then position them around the dome. The precast portion of the project took about a month, says Tim Dolf, senior structural engineer at Frankfurt-Short-Bruza Architects.

Dolf says precast made the most sense by today’s standards compared to limestone, which he calls “the only other alternative.” It was historically necessary to make the dome look like the original limestone material, says Dolf, and that made precast the most practical alternative. “The decision to use precast was made almost instantaneously,” he adds. “We had complete confidence that we could make it work.”

In addition to the panels, Arkansas Precast delivered approximately 800 precast pieces, including ornate items, to the job site. Using the materials helped cut down on overall construction time and guaranteed durability and a finished building that looked to be constructed of the same material, despite the fact that its major components were built nearly a century ago.

“We didn’t want to worry about rusty connections or the penetration of water through the panels,” says Jamison.

“It was all handled very easily at the precast plant, and when they arrived on the job site all of the molds, shapes and sizes fit perfectly with what we were looking to do.”

Although construction of the dome progressed as planned and finished ahead of schedule, Jamison says the project was delayed somewhat by Mother Nature. Wind was the biggest issue, he says, since erecting heavy precast panels 280 feet in the air is not an option when the wind reaches 50 mph. He estimates that the job was shut down for about 45 days due to such forces.

“At times, we had crews out there working at 2 a.m. because the wind had subsided,” says Jamison, who calls the overall project a tremendous success based on the fact that it was finished under budget, ahead of schedule and beyond expectations. The latter is particularly important since the project had more than its fair share of opposition.

“A lot of Oklahomans thought it would be ridiculous to add a dome to the capitol now, 90 years after the building was constructed,” explains Blake Wade, executive director of the Oklahoma Capitol Complex and Centennial Commission. “Today, I can honestly say that it exceeded the expectations of the entire state, and that it’s now the No. 1 tourist attraction for our great state.”

Wade credits precast concrete with helping to make the dream a reality and with an affordable, manageable and enduring product. “It was a thrill to be able to work with all of these fine companies,” says Wade, “and know that because of precast, it was all able to get done,” he says.

Jamison says the camaraderie of the group that designed and built the dome was above par and resulted in such a successful project that he’d do over again, if he could – despite the challenges that could come from trying to get that “last piece” in place. “We’d like to build another dome,” he says, “but that’s the last one for Oklahoma.”