As some aircraft hangars are among the world’s largest structures, heating and cooling these facilities is no small feat. In fact, the sheer size of a hangar is one among many challenges that heating, ventilation, and air conditioning (HVAC) designers and engineers address with each project. For example, depending on the activities taking place, airflow throughout the hangar may need to remove paint fumes or fuel vapor from within the hangar to provide a safe environment and protect adjacent rooms. To accomplish this, HVAC engineers must approach the design with the same care they would use in a laboratory’s HVAC systems, controlling the direction of airflow by maintaining pressure relationships between spaces adjacent to and adjoining the hangar to keep occupants safe, according to Brian Sauer, Principal of FSB’s Aviation Market and a licensed mechanical engineer.

“Sometimes engineers who aren’t familiar with hangars assume their HVAC systems are similar to warehouses. Hangars are not warehouses,” Sauer said. “Designing efficient, maintainable, modern heating, ventilation and air conditioning systems for a hangar requires a knowledge of codes, air distribution strategies, and controls that a firm who doesn’t do this all the time would have a difficult time learning on their first job.” 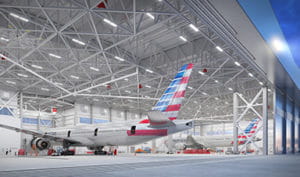 Experience is also beneficial in knowing what questions to ask clients, Sauer said. As a full-service architecture and engineering firm with more than 75 years of experience designing hangars for federal, commercial, and private clients, FSB has honed a list of questions to cover before beginning any hangar project, and many of those questions pertain to HVAC.

HVAC engineers must have a thorough understanding of how the client plans to use the hangar.

For example, for a paint hangar, FSB mechanical engineers would incorporate a more sophisticated air distribution system to provide an ideal painting environment. Air filtration systems would be implemented in the design to mitigate the facility’s environmental impact.

“There is no one-size-fits-all solution for hangar HVAC systems,” Sauer said. “Even within a single airline, one station may operate differently from another in how they choose to perform their maintenance.” 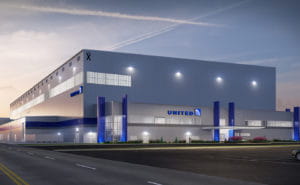 Depending on climate, function, and client preference, engineers determine whether a hangar needs to be cooled, or just heated and ventilated. The firm has designed everything from a completely air conditioned and environmentally controlled manufacturing hangar for Airbus in Mobile, Alabama to more standard maintenance hangars for operations in more moderate climates.

Other hangars require the cabins of the aircraft themselves to be air conditioned, either to preserve finishes or to provide a comfortable environment for maintenance employees. To enable users to condition the aircraft within an enclosed hangar, engineers must include pre-conditioned air units (PCAs) that provide dedicated cooling, and sometimes even heating, to the aircraft.

“We’ve used the hybrid DX boost system, a newer PCA technology, to condition aircraft in recent hangar designs for American Airlines in Brazil and for United in Houston, among others,” FSB mechanical engineer Cory Futrell said. “They are much quieter and do not require a dedicated low-temperature glycol chilled water system, which results in less maintenance and improved energy efficiency.”

Empowering clients to lead the industry in energy efficiency
Hangars are notoriously difficult structures to efficiently heat and cool. The space’s volume alone can pose a significant challenge. On top of this, aircraft-sized hangar doors are regularly opened and closed, allowing raw unconditioned air into the facility.

“We approach our clients’ facilities with strategies and philosophies for conditioning hangars as efficiently as possible,” Sauer said. “The way we turn equipment on and off as needed, the way we adjust the ventilation rates based on weather conditions and occupancy — we’re not developing these control sequences for how the equipment operates from scratch. We’ve done it. Through our experience, we’ve developed a well-tested system that most engineers do not have readily available.”

It’s helpful to understand your arsenal of options when selecting a heating system, Futrell said. In climates even as moderate as Oklahoma, engineers know to supplement the standard ventilation system with some form of radiant heat system. Instead of using fans to circulate warm air throughout the room, radiant heating systems work like the sun, heating objects and people first, then gradually heating the surrounding air through natural convection. This comes in handy when you want to keep people and objects warm even as giant hangar doors are opened, releasing large volumes of air, he said.

Depending on the climate, radiant heating systems might be gas-fired and suspended overhead, or they might be hydronic systems, embedded in the hangar floor. Projects in any climate where temperatures tend to drop below 10 degrees are strong candidates for in-floor radiant, he said.

“Air distribution design also makes a huge difference,” Sauer said. “We need to make sure we are picking the right devices to throw air as far as 100 feet to the floor, then direct it so that it sweeps across the hangar floor and is either returned or exhausted out the other side of the building, depending on the application.” 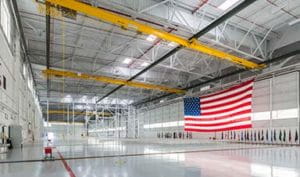 Sauer said the firm has encountered — and replaced — hangars with HVAC systems where the conditioned air is delivered directly across the ceiling space and is exhausted without ever entering the occupied area. High-volume, low-speed fans, he said, also help to destratify the space, redistributing warm air back down to the occupied level when heating is needed, or on warmer days working like a ceiling fan, providing air movement for improved comfort and minimal cooling.

In 2012, FSB designed Hangar 7 at Marine Corps Air Station in Miramar, California, the largest hangar to achieve LEED (Leadership in Energy and Environmental Design) Platinum status, the highest level of classification for green building design. The firm has also designed a number of LEED Gold and LEED Silver hangars.

Maintenance matters
An important aspect of Sauer and Futrell’s jobs is actually coordinating with the rest of the architectural and structural design team to make sure clients’ HVAC systems are accessible and can be easily maintained.

“We can design the best system in the world, but if the people who work in the hangar can’t maintain it, it’s not going to work for very long,” Sauer said. “Many of these systems are often located up high in the hangar bay, so it’s critical to devise a way to actually get to a fan motor, or change filters. This equipment is not easy to access if you don’t put a lot of thought in on the front end.” 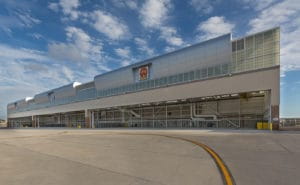 To provide access, well-conceived hangars might include a system of overhead catwalks, as FSB structural engineers devised for their recently completed Helicopter Maintenance Hangar at Naval Air Station North Island in San Diego, California. The hangar received the 2014 Excellence in Structural Engineering Award – Outstanding Project from the National Council of Structural Engineers Associations.

By contrast, many hangars have sub-par maintenance access, Sauer said. He said teams who do not work together in the same office are more likely to overlook this.

“Usually in the ceiling space of a hangar you have mechanical equipment, a bridge crane system, the lights, fall protection, and foam generators that are dumping foam in a fire protection event all competing for space,” Sauer said. “The coordination between mechanical, electrical, structural, and architectural is extremely time consuming and intensive in terms of the collaboration effort to get it right. Thankfully, we are all under one roof and able to provide turnkey design services.”

To learn more about how FSB can apply its heating, ventilation and air conditioning design experience to your next aviation project, contact Aviation Market Principal Brian Sauer at aviation@fsb-ae.com or (405) 840-2931.