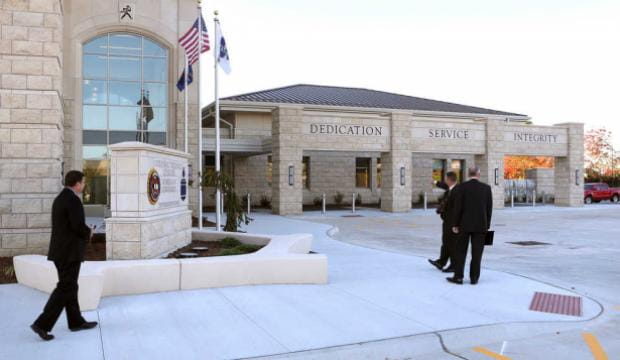 After an 18-month building project that cruised along faster than anticipated, the new Kansas Bureau of Investigation Forensic Science Center is ready to open Monday, Nov. 2, on the southeast side of the Washburn University campus.

“On time and under budget,” KBI director Kirk D. Thompson said with a broad smile during a recent behind-the-scenes tour of the sparkling new facility.

The grand opening will take place Monday, with open houses for the public slated for later next week.

The four-story limestone building, which had a $55 million budget, is a prominent new addition to the Washburn University campus, located along the 2000 block of S.W. Washburn Ave.

It replaces the current KBI lab, which did business for more than 20 years in the cramped basement quarters of the renovated Crane Junior High School, 1620 S.W. Tyler, which was built in the 1920s.

While the crime lab is moving to the Washburn campus, many KBI offices will remain in the old Crane building.

“We’ve been excited about this new building since we broke ground,” Thompson said. “It’s just grown day by day, and transformed what had been a grassy lot into what will be one of the best forensic science labs in the country. It’s really hard to contain our enthusiasm and excitement.”

The new Forensic Science Center sports lots of glass letting in natural sunlight in virtually every room, something KBI officials said was an important factor in worker morale.

Nearly every facet of the building was tailor-made to meet current and future demands of the KBI’s lab, which processes about 10,000 pieces of evidence each year from law enforcement agencies across the state. The lab employs about 70 people currently, with a capacity of up to 110.

Thompson said the goal is for the KBI to complete analysis of each piece of evidence it receives within a 60-day window. He said the agency receives about 50 pieces of evidence each day.

If the evidence can be processed at that pace, staffing levels likely will continue at about 70. However, Thompson said there was a chance more staff members could be hired if evidence isn’t being processed within the 60-day window.

Thompson noted results from the KBI Forensic Science Center lab ultimately are used in court cases — and, depending on findings, can be used to convict or acquit a suspect.

Building planning also took into account Washburn University’s forensic science classes, which will be located in rooms on the south side of the building.

The KBI lab, on the south side of the building, takes up the bulk of the new facility. It features three floors of wet labs, clean rooms for office space and a variety of conference rooms.

All told, the building has about 100,000 square feet of space. Its main entrance is on the northwest side of the building, facing Lee Arena at an angle, where the Washburn University basketball and volleyball teams play.

Washburn officials say they look forward to a cooperative arrangement with the KBI, as the first classes in the new building are scheduled to begin in the spring 2016 semester.

In addition to classroom and laboratory space for Washburn students and faculty, the KBI building also will have an auditorium and an outside dig site, which will be used to simulate crime scene investigations.

Already, some KBI forensic scientists have hired on as adjunct professors for Washburn University, and more are expected to do likewise in coming months and years.

While several other states have cooperative relationships between their bureaus of investigation and a university, the new KBI facility takes the concept to a higher level, said Thompson, himself a Washburn grad.

In addition to the lab enhancing Washburn’s academic science offerings, Thompson said, the KBI also stands to benefit down the road — particularly in the recruitment and retention of scientists: “This whole concept, working with Washburn, has opened up so many possibilities for us.”

For a number of years, Thompson noted, the KBI has had difficulty securing scientists long-term for its lab. Many are recruited from out of state. After undergoing rigorous training lasting up to two years, and costing the state up to $190,000, some scientists stay with the KBI for only a matter of months, then head back to their homes in other states.

Thompson said he is hoping the new facility’s location on the Washburn campus will help put a stop to that, as it will bring greater visibility to the KBI Forensics Science Center and quite possibly result in more students showing an interest in the field as a career choice.

Washburn students also will have the opportunity for internships at the KBI Forensic Science Center.

Thompson praised the job that Thomas L.G. Price did as project manager. In his role as project manager, Price — himself a 23-year KBI forensic science veteran — made sure the building was constructed to exact, almost painstaking, specifications.

Many of the ideas for the building came from other KBI staffers who consulted with Price frequently throughout the project.

Price also collaborated with Washburn professors, including Gerald Bayens, associate dean of applied studies, who came up with the previously unheard-of idea of putting rotating bright lamps in the floor of vehicle bays, allowing scientists to get a better look underneath cars and trucks brought in for evidence.

Other features of the building include: the height of desks in office spaces; extra-strong overhead LED lighting in evidence rooms; the presence of three different bays equipped with heavy-duty lifts capable of examining vehicles that were involved in crimes; and a room with thick metal walls where electronic devices such as cellphones can be stored, eliminating the chance anyone outside the facility could have access to them and thus tamper with the evidence from outside the building.

Clothes washers and shower facilities are in place for men and women who may have come into contact with biohazards materials, and pull-out shelving allows for storage of items based on their size. Water purifiers, evidence driers and exhaust hoods also have been strategically placed for use in labs as needed.

Price said efficiency was a key factor in each of the building’s components, including a new system whereby scientists can request evidence from storage rooms a day in advance of actually needing them. Those items, in turn, can be placed in secure lockers accessible only to the scientist who asked for them and can be picked up early the next day.

Such advance planning not only saves the scientists time, but also allows the person working in the evidence control center to serve the KBI’s external customers — or members of law enforcement agencies — in a more timely manner.

KBI officials believe the ability for their scientists to testify via video is likely to increase in coming years.

“Sedgwick County and Johnson County both have forensic science labs that serve those counties,” Price said. “A few of our customers have had to contract with private forensic science labs to complete their work due to our lack of capacity in the past.” Sections of the new lab include: firearms and toolmarks; crime scene investigation; evidence control; latent print and impression evidence; biology DNA and databank; digital evidence; drug chemistry; trace evidence; and toxicology.

Each lab is located in a highly secured area of the building, open only to scientists and KBI workers, though guided tours again will be offered when advance arrangements have been made.

For many years, Washburn University has offered a criminal justice major. The expanded course offerings at the KBI Forensic Science Center will complement the university’s criminal justice program.

Washburn students taking classes at the KBI Forensic Science Center, meanwhile, must pass security clearance before being admitted to the building.

Jerry Farley, Washburn’s president, said two or three new faculty positions are being formed to work in the KBI building. He said he expects the classes to max out with waiting lists possible in the future.

Beyond that, he said, the KBI facility may well come to define Washburn as a major player in the field of forensic science.

“It’s an ever-growing field,” Farley said. “The facility is going to help us keep up with that.

“We’re pleased to have the KBI on campus,” Farley said. “It’s something people are going to envy all across the country.”