“If we could see three-dimensionally into the ground, we would be scared, wouldn’t we?” said Wes Brannon, construction administration for Frankfurt Short Bruza Architects and Engineers.

The PVC pipe is part of a geothermal system where 101 wells will be used to heat and cool the new 70,000-square-foot public safety center instead of a typical heating and air conditioning system. The new home of police headquarters, the 911 communication center and emergency management operations is the third city-owned building to use a geothermal system. The Mitch Park YMCA and the Cross Timbers Public Service Center were the first two city buildings to use geothermal energy, which uses the earth’s relatively constant temperature to provide heating and cooling for residential and commercial buildings.

“A lot of people don’t understand geothermal,” said Glenn Fisher, Edmond Electric director. “There is nothing magical about it. No abracadabra about it. You are just changing one heating and cooling system for another. It’s not magic by any stretch of the imagination.” 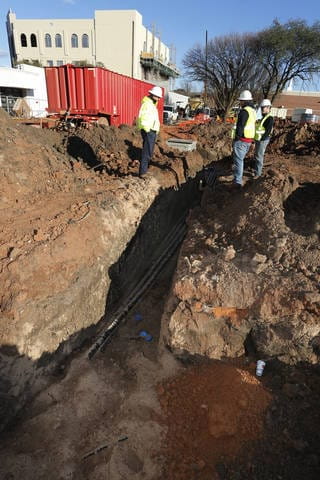 Brian Sauer, principal and licensed mechanical engineer for Frankfurt Short Bruza, said the public safety center will recoup the cost two or three times faster than most similar systems because the building will run 24 hours a day. The average building has a payoff in the five- to 10-year range.

The system will save energy and reduce the city of Edmond’s electricity costs. Fisher estimates the geothermal system will save between 25 and 35 percent on electrical costs. He said he hasn’t calculated an exact dollar figure. About 72 percent of Edmond Electric’s budget goes to wholesale energy costs.

“It helps us shave our summer peak,” Fisher said. “OMPA (Oklahoma Municipal Power Authority) billing requires you to pay a certain percentage of the peak the year round. Anything that shaves the peak helps the year round.”

The public safety center geothermal system has been a challenging project. Sauer estimated 50 architects and engineers at FSB played a role in the design of the two buildings that will make up the $28.6 million public safety center complex. A second structure, the former Edmond Electric building, is being renovated to give the police department the 15,000 square feet of space it needs for laboratory work and to store evidence.

Voters approved in 2011 a half-cent sales tax to build the public safety center.

Sauer said about 10 engineers worked on the mechanical design of the buildings.

“This is a large effort, a challenging project because of the lack of space and the functions of the building are unique, totally different.”

The spec book for the design of the public safety center is one of the largest composed by Frankfurt Short Bruza.

“I think this is an entertaining project with challenges and sustainable technology,” Sauer said. “We have had the support of the city of Edmond. On some projects, people look for ways to save money by not doing this system. It is good to have their support.”

Challenges and surprises surfaced while installing the well fields. In the former bank parking lot, workers found portions of a porch or basement that had to be removed and hauled off which turned out to be costly, said Deputy Police Chief Steve Thompson.

“It was kind of a surprise,” Thompson said. “We didn’t see that one coming. Look at how old this is here. You are right off Highway 66. Who knows what you are going to find?”

City leaders speculated it could have been a house or a gas station from the 1950s or 1960s. The soil in that area had to be removed and new dirt brought in to protect the new pipes.

“You want to avoid rocks and things like that because you want to protect the pipes,” Fisher said. “You want to have a clean field above these lines.”

The flexibility of the pipe underground in the sand also helps to protect the system from earthquakes, Brannon said. The public safety center is expected to be complete by July or August.