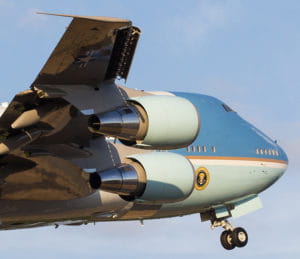 This $250M aviation facility at Joint Base Andrews will support the proposed Boeing 747-8, a 4-engine, wide-bodied commercial aircraft, which will be modified to fit the Air Force’s needs. This aircraft will be configured to allow the President to fulfill the roles of Chief Executive, Commander in Chief, and Head of State while on board.

The intent of the Presidential Aircraft Recapitalization (PAR) Program is to replace the aging VC-25A aircraft fleet which is the military version of the Boeing 747-200 aircraft. These aircraft are currently used to transport the President of the United States, as well as other senior leaders. The aircraft goes by the call sign Air Force One when the President is on board. The current fleet is reaching the end of their service lives, which requires increased maintenance time and costs.

FSB headquartered in Oklahoma City, will provide architect and engineer of record services for the aviation facility.  Pond, headquartered in Atlanta, Georgia, will provide engineer of record services for all site, infrastructure and fueling systems. FSB is known for delivering quality, award-winning projects with high customer satisfaction on flightline facilities across the United States including aircraft hangar facilities for clients ranging from the Department of Defense to Commercial Airlines. Pond is an industry leading fueling, airfield, and aerospace design firm, having completed over 2,000 fueling projects and 120 airfield projects across 460 base and civilian locations worldwide, including Joint Base Andrews.