While the building is being constructed, the bank will continue to help customers out of temporary accommodations at the Shops at Tecumseh Crossing, 3400 24th Ave. NW, a heavy trailer designed specifically for financial services. The trailer has a teller and drive-thru lane, and it seems to be popular with consumers from the University of Oklahoma, President Joey Root said. 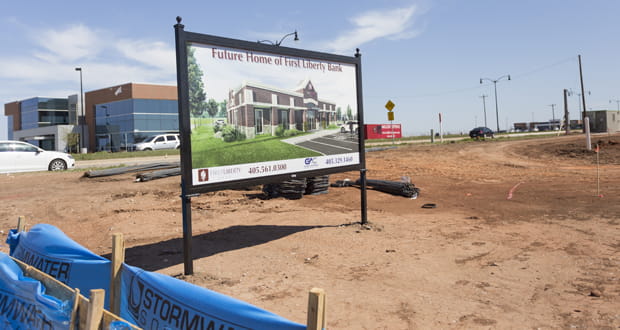 The new building will be finished in early 2019.

Root said it was simply a matter of time for the 12-year-old Oklahoma City commercial bank to expand, and Norman made sense because three of the founders live in the college town: Barry Switzer, Hunter Miller and Toby Keith.

The bank is self-funding the construction. First Liberty had $380 million in assets as of Monday, Root said.

“I would have expected us to be a little bigger by now, but then you’ve got to consider that we made it through a couple of pretty tough economic downturns,” Root said. “We’re getting there.”

Root said bank officials are planning more branches but added that it’s too early to say whether they will be de novo – built from scratch – or acquired from other banks.

“We don’t have a lot of need for branches because most people bank with us over the internet or through other methods of deposit,” he said. “We’ll ultimately have a handful of branches, probably three or four over the next five years in and around Greater Oklahoma City.

“There are a lot of banks that are closing branches down, so that does present an opportunity from time to time,” Root said. “If one came along in a location we really liked, we would consider that.”

Cullin Faison, formerly of UMB Bank and First Bank & Trust, will be First Liberty’s Norman market president. Faison has 10 years of banking experience with an emphasis on commercial lending. He grew up in Norman and graduated from Baylor University’s business school.