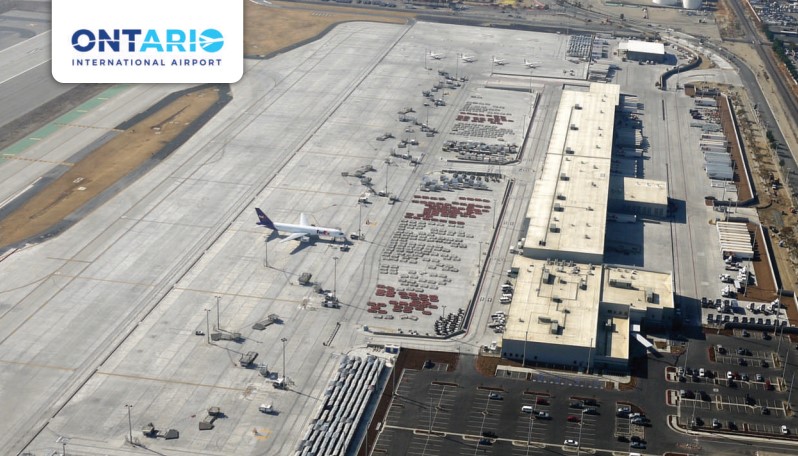 Cargo has been an important bright spot during the COVID-19 pandemic for many U.S. airports—especially Ontario International (ONT), located just 35 miles from downtown Los Angeles. With passenger traffic down about 50% from 2019 to 2020, ONT experienced double-digit increases in commercial freight volume almost every month last year. And 2021 may be even better. In January, ONT handled more than 70,500 tons of freight—a 15.6% increase over the same month last year.

Much of cargo is flowing through a new $330 million FedEx Express complex that was completed in November 2020. In retrospect, the initial planning that began for the project around 2015 to 2016 now seems almost clairvoyant. After operating at ONT for more than 33 years, the shipping giant more than tripled its footprint just in time to accommodate a surge in demand created as record numbers of consumers shopped online to avoid potential coronavirus exposure.

“Even before the pandemic, FedEx Express has been preparing its networks to manage the rising volumes in e-commerce shipments,” Tim Wertner, senior vice president of the Western Division for FedEx Express U.S. Operations. “In just a matter of months, we saw e-commerce accelerate to levels that weren’t expected for another three years. The opening of the new facility at Ontario International Airport better positions our operation to efficiently handle this growing e-commerce volume coming out of the Southern California area and enhances our competitive position in the market.”

The new facilities, located on 50.1 acres in the northwest quadrant of the airfield, nearly triple the footprint FedEx Express previously occupied on the south side. To facilitate the move and expansion, ONT spent $28 million on enabling projects, new facilities for key tenants, demolition and Taxiway C.

Multi-Decade Commitment
Agreement terms for the expansion indicate a long game, including options that could extend FedEx Express’ presence at ONT for up to 50 years. Ontario International Airport Authority kicked the onsite portion of the project off by demolishing existing hangars and other buildings on the 50-acre plot and grading the surface for new construction. The airport authority also led efforts regarding permitting and environmental impact reports/analyses.
FedEx Express was responsible for vacating the 18.5 acres on the south side where it had been operating, and heading up facility construction and associated infrastructure improvements, including 170,000 square yards of new concrete for aircraft ramp and trucking operations.

FedEx Express bid out the project in 2018 and hired Walsh Construction to lead the project. As with other projects at ONT, the airport authority provided oversight during the design and other preliminary stages to ensure that the new facilities would be compatible with the rest of the airport. Keith Owens, program management director at ONT, compares the process to a homeowners’ association approving a new fence or shed built by an individual homeowner. After the shipping giant signed a lease and secured approval for the development plans, it was free to kick off construction.

“FedEx decided to go with design-build, because it’s faster,” says Owens. “One of the reasons more companies are going with design-build is because it avoids the divide of having the designer on the owner’s ‘team’ and the contractor on its own. In this case, they’re on the same team and working together, which theoretically eliminates conflicts.”

Walsh Senior Project Manager Tiago Pina was in charge of the construction schedule, finances, safety programs, quality control and stakeholders. Day to day, much of his time was spent managing up to 72 subcontractors. And building the sorting facility was a massive job on its own with even more subs, Pina adds.

Having worked with FedEx Express before, the Walsh team understood the way the carrier worked and what was needed to stay on track. The first order of business was hiring an architect. Walsh selected FSB Architects + Engineers to lead the building design, and it tapped Kimley-Horn and Associates for civil engineering.

“Kimley-Horn was the clear-cut choice from the start,” says Brian Sauer, an FSB principal. “I think all of us, Walsh included, know how to work with FedEx and understand the needs and stakeholder requirements. There’s no replacement or substitute for experience working with a particular client. There is no cookie-cutter solution, and we made a good team.”

From the very beginning of the project, all three companies knew that FedEx Express would be ready to hit the ground running.

“FedEx has a very well-thought-out, well-planned way to do things like this,” Sauer explains. “When they give you a playbook, they’ve experienced these kinds of projects and they know what they like. Working with a client who has built facilities like this all over the country was really a benefit to us, because they already have a successful playbook. It makes things a lot easier when you’re working with a client who knows a facility as well as FedEx does.”

The shipping giant not only proved to be prepared and experienced, but driven as well.

“One of the very critical components of this was that they already knew their opening date,” explains Pearse Melvin, the project manager from Kimley-Horn. “They had to have 100% confidence in the team that they could meet that date.” 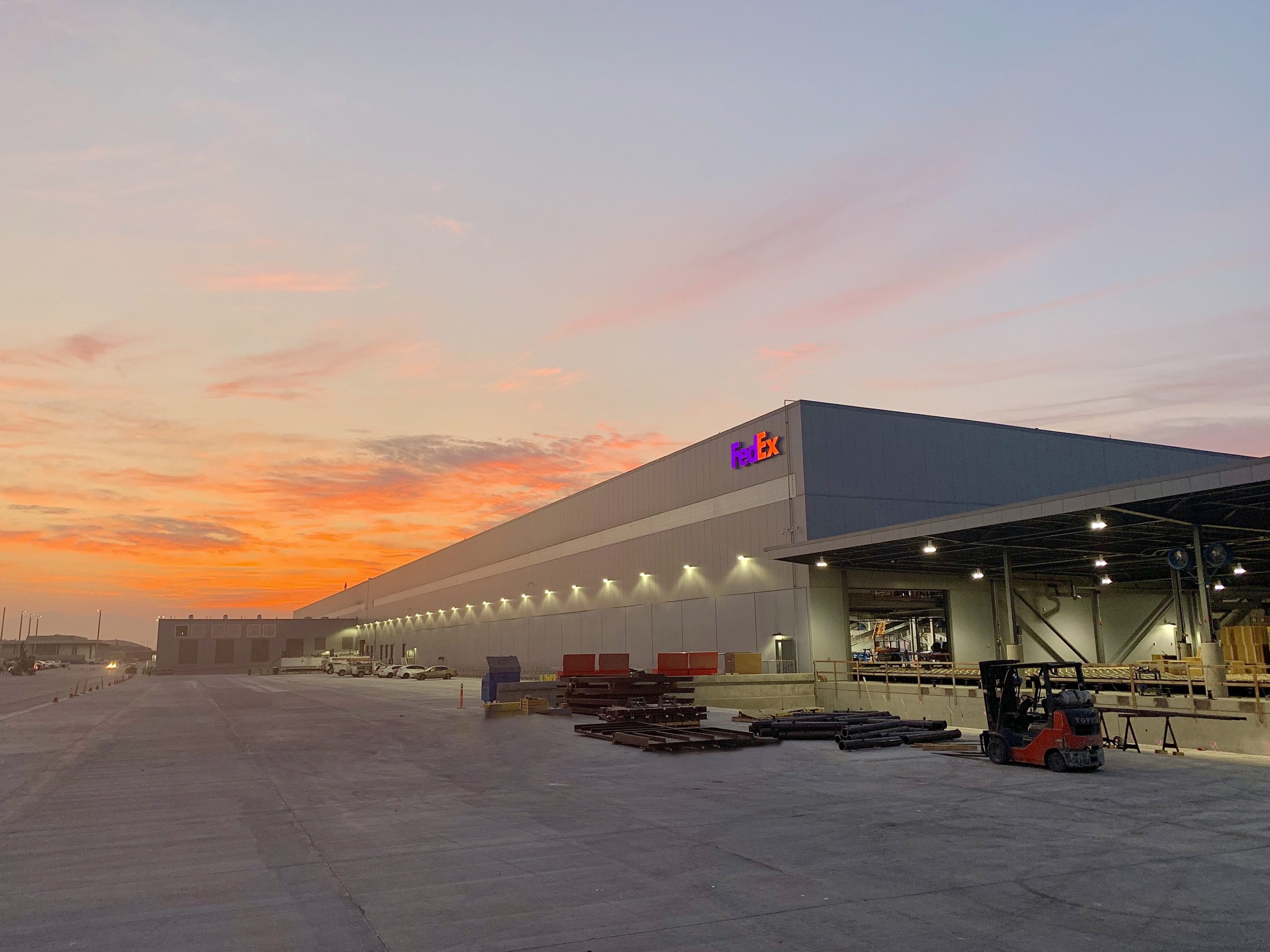 Water management was another big challenge. “We had to keep the fire system active while demolishing the rest of the site, which required a temporary water line,” Melvin explains.

The team also had to divert Amazon trucks, which were been using an entrance earmarked for the FedEx Express facility, to a new perimeter gate. Weekly meetings occurred for a full 1½ years to make sure everyone knew exactly what was going on, Melvin notes.

The sheer volume of permitting was another hurdle for the project team. In addition to complying with FedEx design criteria and standards, the project was subject to permit requirements from the Ontario International Airport Authority, city of Ontario Building and Safety Department, Municipal Utilities Company, San Bernardino County Flood Control District, California Fish & Wildlife Department, and the state water board.

Walsh often felt like the governmental permitting processes moved at a snail’s pace, but adjusted accordingly. At least one subcontractor attributed delays to the political climate in California making it unfriendly to business.

“We were the first major building project that fell under the jurisdiction of the city of Ontario,” says Melvin. “I think the city was trying to learn with this project how to handle that. There is a new ‘smart review’ process they were working through; it was a learning process for everyone.”

Coordinating multiple stakeholders and project components proved complicated. While one team headed demolition and moving existing tenants, another prepared the site for new construction. Because of this juggling act, Walsh had to begin working with a 28-acre parcel instead of the full 50 acres as originally planned.

Fortunately, COVID restrictions had very little impact on the project. Melvin reports that it was relatively easy to maintain proper social distancing because most construction occurred outdoors. However, some material deliveries were delayed due to manufacturing shutdowns.

Another unusual aspect of the project was an Airport Operations Area security design that allowed for an Exclusive Area Agreement, which placed security responsibilities for a portion of the Part 139 airport on FedEx and required the design to be fully TSA compliant.

Despite all of the extra challenges, Sauer is not only enthusiastic about the outcome, but also the way the team achieved it. “Any project will have challenges you have to overcome,” he says. “We had to have a sense of teamwork. When confronted with a challenge, we had to work together to overcome it.”

Communication Was Critical
Weekly meetings were conducted with contractors, subcontractors, FedEx Express, its project representative, the city and ONT to coordinate phasing. The regular meetings were also the main venue for Walsh to secure needed approvals for drawings and documents.

“Everyone was focused on getting the project done and providing the best value to FedEx,” says Pina. “Everyone had the same mentality of working through challenges together to get the job done.”

Owens recalls that it was easier to move contractors and subcontractors along than the city’s planning, engineering and building and safety departments. “We got them up to speed by inviting them to the weekly meetings so they’d hear things at the same time we were,” he says. “So if we needed to move a water line, they would hear it directly from us. And that avoids the old game of ‘Operator,’ [which shows that messages usually change
when passed from person to person].”

FedEx Express, which places a premium on communication and timeliness, was pleased with both aspects of the large ONT project.

“This project involved many different and diverse vendors as well as multiple city, county and airport oversight departments,” says Wertner. “It also involved close coordination with our operational team at Ontario. If there isn’t strong communication and coordination between all the contractors, vendors and stakeholders throughout a project of this scope to ultimately deliver a facility that meets everyone’s needs, it could pose a challenge. However, I’m proud to say this was ultimately met by an effective and efficient team of motivated individuals on all sides with a common goal.”

Will There be a Phase 2?
ONT anticipates a ripple effect of more improvements at the airport following its investment in the new FedEx Express development. And the shipping company demonstrated its commitment to the airport by expanding its footprint and building new facilities.

Ultimately, the project finished one month ahead of schedule, and the FedEx Express team is pleased with the results and process.

“Team members, stakeholders, contractors and vendors with the right attitude, and passion mean everything to a project of this size,” Wertner remarks. “Without fostering a team of passionate individuals that communicate effectively, a project will not be as successful as the one in Ontario. There were hundreds of contractors and countless FedEx team members that facilitated this project from start to finish in order to complete it on time, just before the busiest holiday shipping season in our company’s history.”

Walsh personnel are similarly positive. “This is a major facility for FedEx and for the airport,” Pina says. “I think other companies might see this airport as a place to do business in terms of air cargo. This is a much bigger facility than was there before. And especially now, with the pandemic, it’s helping the airport a lot. I think that will help the airport in the long term, and we might even see a phase two due to the growth of e-commerce.”

While FedEx Express isn’t talking publically about more phases, it will likely keep its eye on ONT when mapping out what’s next.