FSB stepped up to help the Oklahoma Department of Tourism expedite its office relocation into the Department of Commerce building when the agency was given five days to vacate its current offices. The FSB team worked with Tourism and Commerce staff to successfully plan and execute the move in just one weekend.

The Situation: Relocation time-frame moved up two months on short notice
It was a Friday evening in late August 2015 when Deby Snodgrass got the call triggering what would be a weekend of “controlled chaos” for the Oklahoma Departments of Tourism and Commerce, both agencies for which she is the executive director.

Since June, the Department of Tourism had been working with FSB on relocating from its offices at the First National Center. The four state agencies with offices in First National planned to leave by the end of the 2015, and Tourism was on track to move all 100 of its employees by November.

That plan was thrown off course on Friday, August 21, when Governor Mary Fallin’s chief of staff called Secretary Snodgrass with news that her department would need to make an emergency move — utilities would be shut off at First National in five days.

“Fortunately for me, I knew exactly who to call for help,” Snodgrass said. “Secretary of Finance Preston Doerflinger, Secretary of Transportation Gary Ridley and FSB. Together with our outstanding teams at Commerce and Tourism, we launched into action first thing on Saturday morning.”

The Solution: A relocation schedule compressed from weeks to days 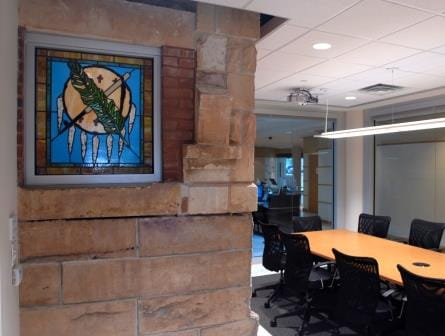 Tourism had already narrowed down its options to a shortlist of locations, one of which was within the Department of Commerce’s building. Snodgrass believed the proximity would promote collaboration between the two departments. With a compressed timeline, the decision was quickly made and a charrette held Saturday morning to plan the move of two large state agencies — Commerce had to consolidate to the second floor at the same time that Tourism was moving onto the first.

“We fit into one day what would normally take place over several weeks,” said Fred Schmidt, FSB’s principal on the project. “Employees had to be able to show up at their offices, pack up their stuff, find their new desk on a map and get to work. Tourism oversees 60 state parks, a weekly television show, a bimonthly magazine and much more. They couldn’t miss a beat.”

Snodgrass said she welcomed relocation as an opportunity to modernize and streamline the Tourism offices. FSB had already taken a thorough inventory of all furniture and equipment, including the Discover Oklahoma studio, that would be moving to the new space. FSB interior designer Lauren Nash had been studying how the seven divisions within Tourism interacted with each other to determine how best to create the new layout.

“For the office to function well we needed to understand their operations,” said Nash. “This is what we’ve been trained to do as designers and planners, and it becomes a mental checklist of everything we know we need to ask the users. Then the adjacencies begin to appear so that they have a very functional and flowing office.”

From the beginning of the project, the goal had been to design a work-space that would set employees up for success, simplify their workflows and allow for future growth and flexibility. Even with a short timeline, long-term functionality was paramount. Four months later FSB is putting the finishing touches on the workspace, adding conference rooms and adjusting thermostats and lighting to give employees more control over their environment. But the bulk of the relocation happened during just a few days in August.

The Result: Modern, streamlined offices that enhance efficiency and collaboration 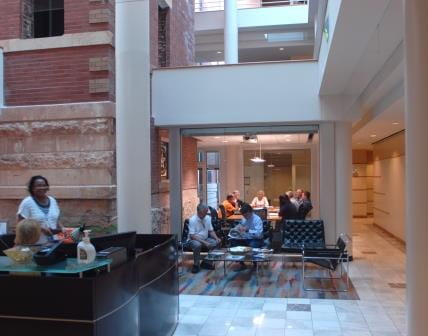 “FSB exceeded my expectations in every way,” Snodgrass said. “They worked all weekend and at night. They were willing to do whatever it took to reconfigure the space, ensure fire codes were observed and meet the time deadlines. The short time fuse definitely presented a unique set of challenges – but I am always ready to tackle the impossible. Where there’s a will, there’s a way.”

Now Snodgrass said she is watching the two agencies, Tourism and Commerce, become a blended family.

“Every day people are discovering new ways to work together to reach our common objective of creating and delivering high-impact solutions that lead to prosperous lives for all Oklahomans,” Snodgrass said. “The work-spaces are still in the process of being reconfigured – it’s an ongoing process that will be completed in early spring 2016. For now, we are crowded but happy thanks to the helping hands of our friends and partners who made the impossible possible.”

Interested in learning more about how FSB can help expedite your next project, contact  Laure Majors at busdev@fsb-ae.com or call her direct at 405.840.2931.

Learn more about the Oklahoma Departments of Commerce: http://okcommerce.gov/   and Tourism & Recreation: https://otrd.ok.gov/OkTourism/