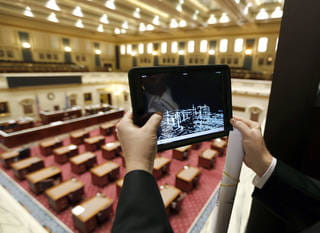 Extensive interior repairs and refurbishment of the state Capitol, which had been planned to begin next year, will start next month, project leaders said Thursday.

First on the list: Oklahoma Senate and House staff space on the first and third floors.

Specific architectural drawings and costs for that work are not available, said John Estus, a spokesman for the state Office of Management and Enterprise Services.

Asked whether it is unusual not to have this material in hand with work scheduled for so soon, Estus said the plans still are being formulated.

“It’s extremely aggressive, but they can save a lot of money if they can get started that soon,” he said.

He said refurbishment of the Senate staff area will be aided by architectural drawings produced previously, but added that it was up to the Senate to release these plans publicly. Matt Glanville, a spokesman for the Senate, said he did not have the drawings.

While work will begin soon on the Senate and House staff space, testing is still being done on the crumbling exterior of the building to see best methods for repairs. Windows are in bad shape, and many will have to be cut out and replaced.

Towering scaffolding has been set up on the south side of the nearly 100-year-old building to assess repair techniques and costs for fixing the exterior. The limestone facade is stained and water intrusion has led to deterioration. Bits of rock have been falling off.

Walls along the roof and ornamental features are not anchored properly and pose a risk of falling. There are cracks in panels of the relatively new Capitol dome.

The Oklahoma Legislature approved $120 million in bond money to repair the building, which also has leaky plumbing and outdated electrical wiring.

More money will be required if all of the proposed repairs and refurbishment are to be completed, but a prioritized cost list is still being formulated.

“Although it is certain that additional funding will be required to meet the overall project goals identified, we are in process of developing cost models to align with the scope of work,” stated a report submitted Thursday to an oversight committee.

The Senate and House staff space is first on a phasing plan that calls for building occupants to be moved only once.

These staff members will move from largely substandard basement offices to the first and third floors, where they will stay. Once they are out of the basement, construction workers will tackle major problems there, including the broken sewage system.

It’s not clear who will eventually be moved into the basement.

The State Capitol Repair Expenditure Oversight Committee was told Thursday that by moving people only once, tenant relocation expenses can be reduced.

The report, which was approved by the committee, estimated a six-year time frame for the project.

It was prepared by Manhattan Construction and Frankfurt Short Bruza Architects & Engineers, the construction and design firms working with the state to restore the interior.

“The approach we’re suggesting represents a much more efficient use of taxpayer resources and the least disruption to the functions of the building,” said Kyle Nelson, project director for Manhattan Construction.