For the past seven years, the Office of Management and Enterprise Services and the State Capitol Repair Expenditure Oversight Committee have partnered with historical, architectural and engineering experts on the Oklahoma Capitol Restoration Project to improve safety and accessibility, modernize equipment and infrastructure, and elevate the visual grandeur across every square inch of the 105-year-old people’s house. Final restoration efforts inside the Capitol Building are wrapping up now, and the project will reach completion later this year on schedule and under budget.

“Most buildings are either office buildings, a museum or a tourist attraction,” said Trait Thompson, executive director of the Oklahoma Historical Society and former leader of the Capitol Restoration Project. “This building is all three. It has to simultaneously serve as the seat of government, a place where legislators can gather and interface with the public, an office for all of the staff who work in this building, and also serve as a tourist attraction and museum where people can come and learn about their state’s history.”

Before exploring the restored architectural art and ceremonial spaces throughout the historic building, visitors arrive at the Capitol’s new front door. Just off the south plaza, a subterranean portico now opens to the building’s foyer, complete with a marble welcome mat etched with Oklahoma counties. It leads to the gift shop, café and museum.

The stairs to the original main entrance, identified by its massive cast-iron doors, could not comply with Americans with Disability Act standards without disrupting the building’s ornate stone façade. To face this obstacle, restoration teams built the subterranean entrance to achieve multiple goals. First, to provide an ADA-accessible entry to deliver a consistent experience for the public. Second, to allow for an effective security checkpoint and improve safety. Finally, to instantly connect visitors with the new hub of amenities located on the ground floor, which would be missed if entering through the original doors.

This space also features an installment of three maps displaying Indian Territory, the proposed State of Sequoyah and Oklahoma when it first became a state in 1907. The maps double as both educational and functional, offering a place for visitors to sit and enjoy a sandwich or steaming latte from the café. 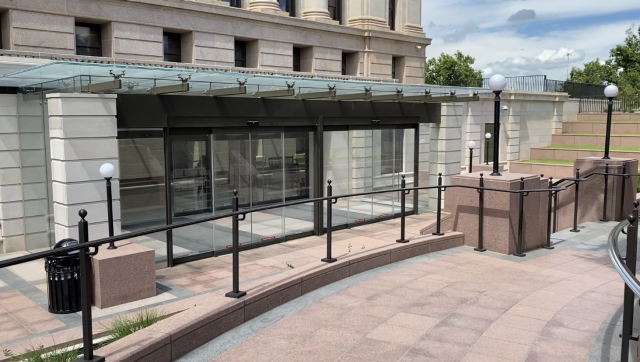 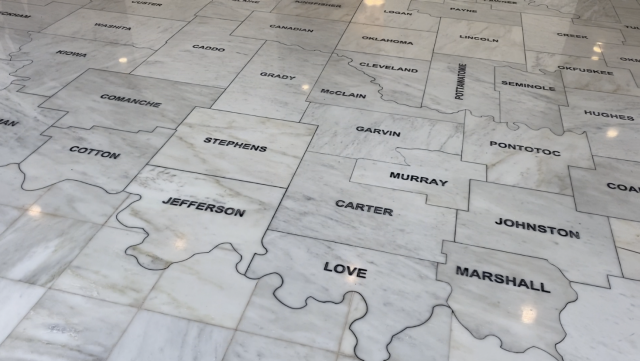 The Capitol building can be a maze of marble to visitors unfamiliar with its layout. Fortunately, the new Digital Wayfinding System is a helpful resource for navigating the six-story structure. Made up of 50 large touchscreen panels, this computer-based system provides convenient self-service stations installed on every floor.

At each entrance and elevator bank, monitors display digital maps allowing visitors to select destinations throughout the Capitol and highlight a direct path from their current location. Specific monitors occupy relative spaces to display schedules for meeting rooms, or even serve as legislative directories to easily connect citizens with their state leaders.

The Oklahoma State Capitol Museum is a brand-new attraction located on the ground-floor rotunda and offers a new way to experience the building’s history, learn about state government and the understand the scope of the Capitol Restoration Project. Within the museum entrance rotunda, the restored original stained-glass saucer dome — now over a century old — welcomes visitors to a state-of-the-art gallery. Past meets present through displays of artifacts and relics accompanying graphic panels and digital interactives. For the first time in history, innovative technology offers an audio-visual presentation of the Capitol Building’s antiquity.

View a recap video of the Capitol Museum grand opening and ribbon-cutting ceremony. 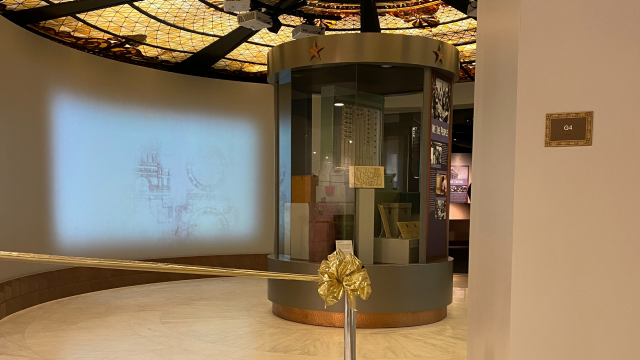 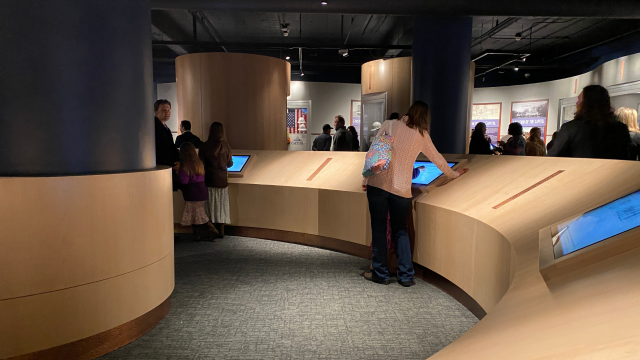 Weighing almost 3,500 pounds, a new 14-foot bronze relief sculpture of the state seal rests in the ground-floor rotunda and replaces the terrazzo state seal featuring a slightly different design installed in 1966. The restoration team commissioned the bronze seal from the Crucible Foundry — a locally-owned business in Norman, Oklahoma — which also cast The Guardian, the statue created by Enoch Kelly Haney, that gazes over the Capitol Complex from the top of the dome. 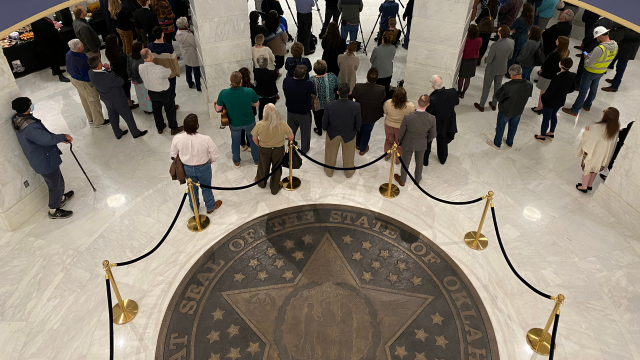 The rotunda spaces are a showstopper during any Capitol visit. As the connection between the ground floor, second and fourth floors, the square rotundas provide the most cohesive experience of the Capitol, offering views from the state seal on the ground floor to the vibrant dome above the fourth floor.

Prior to restoration efforts, there were only two rotunda spaces within today’s second and fourth floors. Aiming to bridge the experience of the new ground-floor visitor center with the rest of the Capitol, architects removed a circular section of ceiling directly above the state seal. This change extended the rotunda down and inspires a moment of wonder as visitors gaze from the seal up through the new oculus.

Strategic color schemes within each rotunda deliver an even greater impact due to a gradient effect. White marble glints throughout the ground floor, a contrast to the bronze seal. The second floor incorporates soft beige, red and blue colors from the fourth floor, whose bright pigments, Greek architectural elements, stained glass and infamous dome make it the true star of the show.

In both the second and fourth-floor rotundas, restoration teams adorned the plaster-covered tile walls with an ashlar paint pattern to mimic the limestone blocks originally intended for those spaces. They also uncovered and restored the fourth floor’s arched wall niches that originally housed statues. Soon, paintings curated by the Oklahoma Arts Council will hang in these spaces, joining the collection of permanent murals resting just below the dome. These vivid works depict elements of Oklahoma history and culture, including Native American communities, early exploration and development, tensions over territory, and foundational industries like oil and gas, agriculture and art.

Above them, the dome’s base boasts a sunset painted in hues of pink and gold commonly seen on the Oklahoma horizon. The rest of the dome’s paint scheme of metallic gold, rich red and light green represents the official state flower, gaillardia, complete with a stained-glass state seal at its crest.

Originally called the state room, the Blue Room serves as an impressive and elegant space for executive branch ceremonial functions. Here, the Oklahoma governor hosts press conferences, ceremonial bill signings and visiting dignitaries, so restoration efforts focused on artistic details throughout the room to maximize its potential and reflect its importance.

The restoration team partnered with historic paint consultants and local artists to bring the Blue Room to life. The new design elevates the impact of the ceremonial space and draws gazes up toward the meticulously hand-painted murals on the ceiling. They emphasized details in the room’s ornamental plaster and muted the wall panels to showcase blue accents through the ceiling murals and hand-painted urns, reupholstered furniture and a new area rug. Additionally, the Blue Room was modernized to include a new sound system and LED lighting in the restored chandelier.

Per tradition and Oklahoma statute, members of the House of Representatives and the Senate meet annually to consider legislation in their respective chambers of the Capitol. However, tradition didn’t account for the technology needs of modern lawmaking, including audio, video and even device-charging capabilities.

Below tall ceilings adorned with ornate plaster and stained-glass panels, the House and Senate chambers contain two levels, a floor where legislators convene at their desks during session and an upper gallery where the public and press can observe proceedings.

Seeking to install modern equipment while maintaining the historic value of both chambers, restoration teams removed the flooring to lay new data wiring and cables, and then rebuilt the floor over them to ensure they would go unnoticed.

In each chamber, the desks are arranged in a classroom-style formation facing a dais that seats legislative leaders. Restoration teams redesigned the House dais to be ADA compliant and removed the chambers’ restrictive glass press boxes that used to encase Capitol reporters.

In addition to fresh carpet and gallery chairs in both spaces, the Senate features new replicas of its original 1917 wall sconces to honor the chamber’s historic integrity. The House maintains its original sconces.

As in the Blue Room and other areas of the building, the most noticeable changes involved repainting the plaster on walls and ceilings and replacing furniture. Artists reimagined the color schemes — red and gold accenting the Senate and green and gold accenting the House — to brighten the walls and highlight intricately carved leaves, flowers, Greek key patterns and other decorations. The stained-glass panels were repaired and polished, and new LED lighting illuminates them from within. Details previously inconspicuous, now receive the visibility they deserve, even from the floor.

View before and after pictures on the Capitol Restoration Project Facebook page. 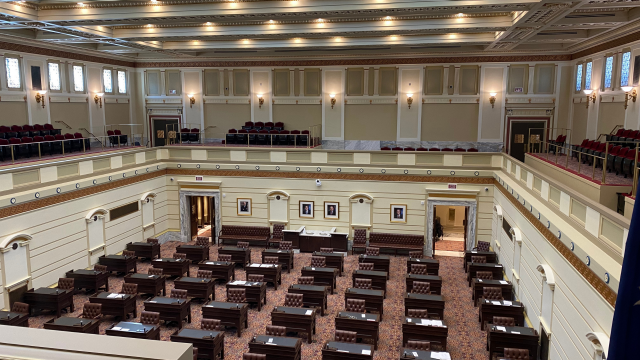 Prior to the Capitol Restoration Project, the building’s exterior suffered from neglect and improper maintenance, leading to broken and stained stone, corroded steel windows and water infiltration. To repair the damage and boost preventive measures, restoration teams cleaned and renovated all 12 elevations of the Capitol and stayed true to historic materials at every opportunity.

All limestone and granite surfaces were power-washed and steam-cleaned. Areas needing special attention to remove tough stains were treated with microabrasion, employing small glass beads and low water pressure. Decorative stone was repaired by hand, and the quarry that provided the original exterior stone in Bedford, Indiana, supplied replacement limestone weighing up to one ton.

To service the Capitol’s 477 windows, the teams had to remove lead-based paint, restore or replace the original steel frames, outfit them with new glass and install interior storm windows to increase insulation.

To top it all off, teams installed energy-efficient LED lights across the building exterior to enhance security and ensure the people’s house shines through the dark. 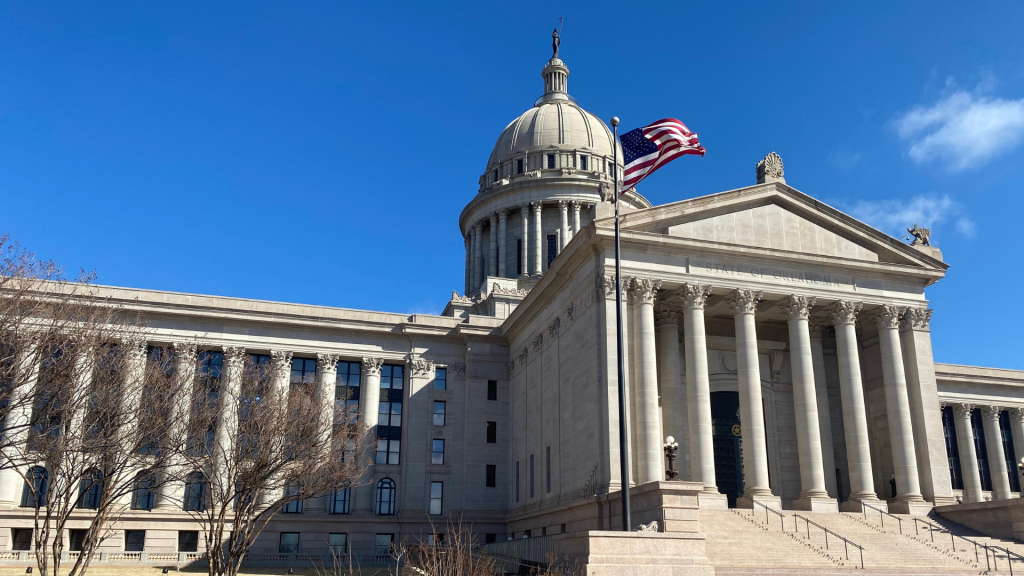 The Capitol Building is open to the public at no cost on weekdays from 7 a.m. to 7 p.m. and on weekends and holidays from 9 a.m. to 4 p.m. Plan a tour or host your next event at the Capitol.

Special thanks to Trait Thompson and Paul Haley for their leadership in this project.

Thank you to each and every team who has collaborated with OMES on planning and executing this monumental restoration project, including: