The expansion project is driven by the need for more capacity in the terminal. Currently the airport only has one leasable gate available, limiting the airport’s ability to attract new airlines or for an existing carrier to add capacity. Additionally, the models of operation for TSA have evolved. For this reason, a larger, consolidated security checkpoint with more space both pre- and post- security have become imperative. 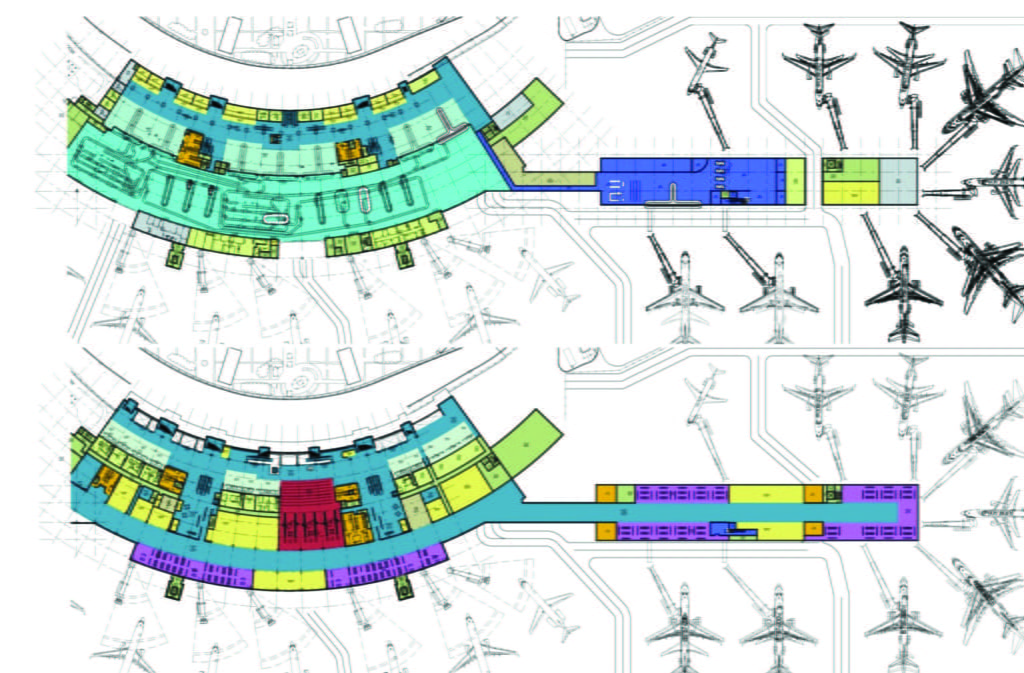 “Our partnership with FSB and HOK, will deliver a truly spectacular addition to the airport terminal,” said Mark Kranenburg, Airports Director. “We are positioning ourselves to be a premier airport that balances passenger security with customer experience. The new addition will truly meet that global standard, making Will Rogers World Airport unique to other airports across the country.”

Travelers are becoming less dependent on traditional ticket lobby functions and are checking-in via smart technology devices instead. A new consolidated security checkpoint is designed with those travelers in mind providing easy access and a streamlined process that will allow people to get to the gate quickly with time to relax and enjoy amenities prior to boarding a flight.

Unique to Oklahoma City’s airport and harkening back to air travel’s golden age will be the reintroduction of an observation gallery. The suspended viewing deck in the heart of the terminal will give the public access to views of the concourses and the airfield. The gallery will feature additional lounging space, exhibits, and one-of-a-kind views.

The plans allow for expanded shopping and dining opportunities just footsteps away from the gates, giving travelers more options to relax or have fun while they wait for their departure.

The new design calls for the integration of public art installations and expansive windows and skylights allowing for more natural light. Interior enhancements of some existing spaces are also planned including expanded greeter areas and more seating in the baggage claim.

“This project is a symbol of the continued growth of our City and will be a welcoming beacon for Oklahoma City travelers,” said Rick Johnson, Principal and COO of FSB. “We look forward to making Will Rogers World Airport a destination for travelers around the globe.”

This expansion project will provide four new gates. An additional six-gate expansion is planned for the future when demand merits. “The design will enable the airport to attract new airlines and reintroduce international travel, expanding destinations and placing Oklahoma City on the map of the world’s top airports” said Will Jenkinson, director of HOK’s aviation and transportation practice.

High-tech improvements will further enable passengers to receive real-time flight information, keeping travelers up-to-date and informed down to the minute. A wider concourse will provide a variety of seating options and integrated amenities to better meet the needs of today’s traveler.

With advanced design and state-of-the-art improvements, the project will upgrade Will Rogers World Airport to the next level in travel and leisure, attracting worldwide visitors while positioning Oklahoma City as having a world-class, modern airport.

About FSB
FSB is a full-service, nationally recognized architectural-engineering- planning firm and has been a demonstrated leader in the delivery of quality services for 70 years. FSB provides expertise in architecture and engineering, including architectural design and production, mechanical, electrical, plumbing, structural, civil and fire protection engineering. In conjunction with exceptional interior design, planning and design-build services, FSB has created places of distinction nationwide.

About HOK
HOK is a global design, architecture, engineering and planning firm. Through a network of 25 offices worldwide, HOK provides design excellence and innovation to create places that enrich people’s lives and help clients succeed. For five consecutive years, DesignIntelligence has ranked HOK as a leader in sustainable and high-performance
design.