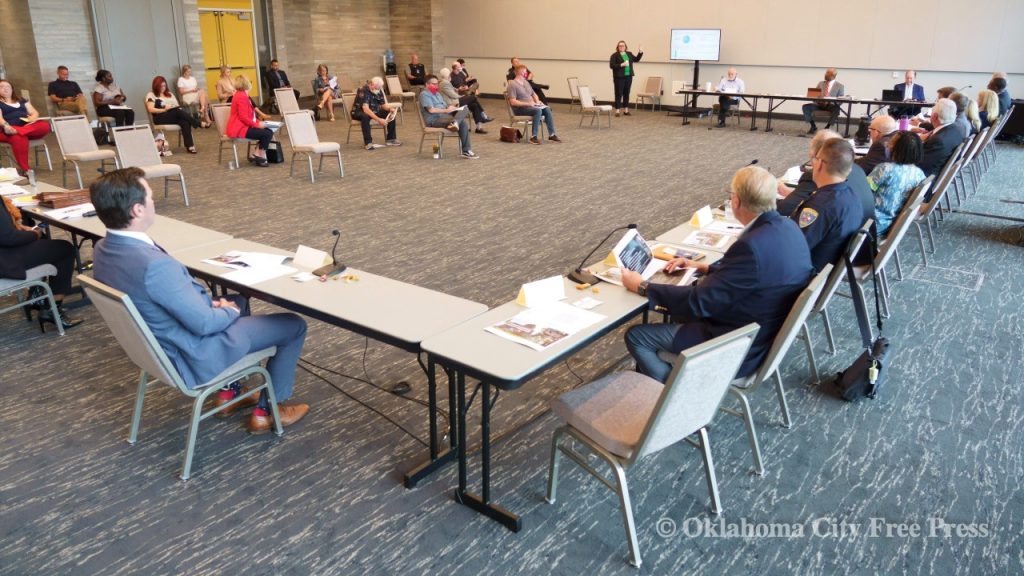 The group listened to a report on a new task force created by CJAC members in order to identify “high utilizers” of the Oklahoma County Detention Center (Jail). The Task Force seeks to find ways to intervene in the lives of people who are likely to go to jail.

The Council also heard an interim report from jail facility consultants about what problems they have identified and possible avenues for an improved facility.

After installing new data tracking software called Jail Tracker, incredible amounts of data that were previously not captured can now be accessed for insight about trends among the Jail’s population.

The new task force has the job of identifying what is termed “high utilizers” by finding people in our community who have been booked into the Jail at least six times in the last three years.

Their preliminary culling of that data showed 1,159 people meet that criteria. Some with far more bookings than six in that time frame.

Among those who fall under the category of high utilizers, the task force determined that most report some experience with mental illness. However, of those identified, very few have received community-based mental health treatment services and 72% of those have had little or no treatment services outside of the jail.

Ravitz explained to the panel that most of these high utilizers are in because of small petty crimes and that they need to be aided before they get into felony territory.

Ravitz related the story of a woman with mental illness who has been arrested many times. Recently she “exposed her front” to police and was arrested on a felony indecent exposure charge.

Dan Straughan, Executive Director of the Homeless Alliance, said that of the twenty people identified as the highest utilizers of the Jail, he found 18 in the Homeless Management Information System (HMIS).

HMIS keeps track of people receiving services related to homelessness in our community. He explained that a lot of these folks have probably been arrested for things like trespass or public intoxication. He identified these and other offenses as crimes of poverty.

That task force will continue sorting through data to find what crimes this category of community members are being charged with most.

Jail consultant John Semtner, principal of the FSB firm, provided a preliminary report on their findings associated with the County Jail.

In the process of analyzing the problems being faced by the Jail, the group has toured the Jail and interviewed stakeholders including current and former detainees at the Jail, Jail staff and administration, law enforcement from across the county including the Oklahoma County Sheriff’s Office, nonprofit professionals, and community members.

Just last week Free Press reported on a recent community listening session where people shared gut-wrenching stories of pain the community has experienced due to the Jail and policing.

As CEO of the Oklahoma County Criminal Justice Authority (Jail Trust) and chief administrator of the Jail, Greg Williams mentions staffing issues in every meeting of the Trust. It is a difficult job. The Trust has created incentives for remaining on staff.

In spite of that, staffing remains very low. The facility itself is not designed in a way that allows for efficient staffing even under the best conditions.

The condition of the Jail has been cited as a reason for leaving employment at the Jail by many former staff members. Training costs money, and with high turnover, costs rise.

Another problem produced by insufficient staffing is the loss of time to interact with detainees. When Detention Officers aren’t interacting with detainees, it causes more violence, desperation, medical and mental health issues.

Poor building maintenance was listed as a systemic problem by the consultants.

They pointed out that poor maintenance reduces safety for everyone at the Jail.

Specific safety infrastructure is in disrepair at the Jail, they said, listing the

The Jail has undergone significant repairs in the last year, thanks to the application of CARES Act funds. But there is still much to improve.

Consultants said that there is non-compliance with both the American Correctional Association (ACA) and the Prison Rape Elimination Act (PREA) in the physical plant and in operations.

This, they explained, reduces the safety and well-being of people detained at the Jail.

This all leaves Oklahoma County in a position of financial liability.

At the County Jail, the medical facility is on the 13th floor. That means that detainees at booking aren’t given a thorough enough physical evaluation. Medical staff members are scattered throughout the building, some doctors and nurses even working out of cells.

Access to care is a challenge in a high-rise, as detainees must be taken on elevators to reach the clinic, which puts a strain on staffing.

The clinical space available does not allow for appropriate separation between detainees.

The chilling statistic was shared that of the 1,600 plus detainees, over 500 are on some form of psychiatric medication.

Access to facilities and programs has been a challenging problem for the Jail. There is not enough dedicated space for mental health services, medical support, housing services for those about to be released, job training, or other needed services in the Jail.

Furthermore, the size and shape of the building make it difficult for visitors and even defense attorneys to see people who are detained in the Jail

While it still may be early in the process, the consultants have been looking into options for ameliorating the many problems of the Jail.

Shortening the process of jailing is one way to address these problems.

If there are fewer days between arrest, own-recognizance bonds, mental health treatment if appropriate, seeing a judge, and being assessed for diversion programs, the population will reduce.

That means a smaller Jail could be built. It has been suggested by members of CJAC and of the Jail Trust that having on-site adjudication would speed this process along significantly.

As for the physical building, solutions are tricky.

The existing Jail tower could be renovated and an annex could be built. Logistics of that option are difficult. The renovation would have to take place in stages, while detainees were re-housed elsewhere.

Another option would be to build a new facility on-site. The space available for construction at the site is, as the consultants described, “awkward.”

The third option discussed was to build a new facility elsewhere but within a ten-minute drive. The consultants have identified a number of potential sites for that option. However, that option will require public transportation to serve the location, both for visitors and for those detainees being released from Jail.

Semtner said that the current location is close to the courts and other government agencies as well as being close to public transportation for family members and others.

Of course funding any of those options will be a struggle.

The consultants will hold another community meeting in late September with the hope of bringing options to CJAC in October. Final recommendations are expected to be delivered in November.