As a critical piece of an industry where efficiency quickly translates into dollars, effective aircraft hangars are designed to support specific operations.

Whether a commercial airline intends to rotate six aircraft per day through a hangar for line maintenance, a manufacturing company needs a secure environment for building aircraft, or a military operation requires a specialized ventilation system incorporated for stealth painting, hangar design decisions should be made with function in mind. The doors of a hangar, through which aircraft move in and out, are one such design choice. FSB President and Aviation Market Principal Philip McNayr said understanding the owner’s operations plan is crucial to guiding clients toward the best door option.

“We have to understand how they’re going to be using the hangar,” McNayr said. “These doors make up nearly an entire wall of the structure, and they can be time-consuming for the user to move around. Door type can have a major impact on aircraft maintenance operations and efficiency.”

“We lay out the advantages and disadvantages of each option and make a recommendation based on our experience,” McNayr said.

“Hangar door type selection is ultimately the client’s decision and our goal is to equip owners with the best information based on their specific needs.”

After working closely with the owner to understand both their specific operations requirements and their positive past experiences, rolling steel doors were selected for Airbus’ manufacturing hangar in Mobile, Alabama.

“The hangar has two bays, and the doors move between the openings, blocking one or the other,” McNayr said. “The Airbus team is satisfied with this because aircraft stay in there for days at a time. They also tend to keep the doors closed most of the time because they temper the air inside the hangar, and make an effort to keep dust away from open cockpits and exposed wiring.”

Airbus’ rolling steel doors provided the security the company needed for their work to assemble and finish out the aircraft within the hangar.

Dr. Ben Wallace, FSB’s Senior Structural Engineer, said he is responsible for working with the selected door and ensuring the hangar is structurally sound. Rolling steel doors do not require much overhead steel reinforcement, because the weight of the door rests directly on the ground rails, he said.  In some hangars door pocket enclosures, sections on one or both sides of the aircraft opening are built to contain the stacked leaves in order to allow for a wider aircraft opening are sometimes included in rolling steel door hangar designs. These door pockets can be incorporated into the hangar’s structural steel design that provides greater rigidity to a hangar’s framing system, Wallace said.

Since most maintenance can be performed from the ground, rolling door repair and routine maintenance is often the more straightforward between the two door options. However, Mark Timbrook, FSB Associate Aviation Market Principal, pointed out that owners can sometimes find ground rails to be a nuisance.

“For one, they are bumpy for the aircraft and maintenance vehicles,” Timbrook said. “They also have to be cleaned out periodically because dirt, debris and ice accumulation can affect how the doors move along their rails. We include drains between rails to prevent any standing water from freezing, and in colder climates we heat the ground rail system to keep it melted and operational.”

“Think of it as a big venetian blind, with a fabric curtain on both the inside and the outside, attached to each slat,” Wallace said. “Just like a venetian blind, the slats stack and the fabric folds between the slats as they are pulled upward.” 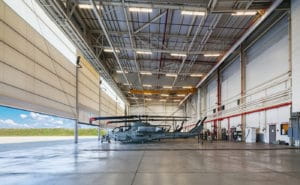 Owners appreciate the vertical lift fabric doors’ ability to seal a space – while vertical lift doors offer significantly less insulation capacity than typical rolling steel doors, they compensate by sealing their edges against air infiltration better than the typical rolling steel door.  In many cases the reduction of air infiltration more than compensates for the lower “R” value of the door panels.

“I was in a blizzard in western Pennsylvania in a U.S. Marine hangar,” McNayr said. “On the inside face of that vertical lift fabric door, with a blizzard going on outside, and I could not feel cold air coming in.”

McNayr said a hangar FSB designed for FedEx in Anchorage, Alaska chose the vertical lift fabric for the same reason – they would leave the doors down much of the time and had the option to lift only a smaller door section to allow shorter vehicles like trucks into the hangar while keeping most of the warm air inside the hangar.

In Oklahoma City, FSB designed a hangar for Field Aerospace – the hangar needed a door with a tail slot to allow the larger planes to get the tallest piece of the plane, its tail, to pass through the opening. The tail slot is a taller portion of door in the middle of a hangar, and, Wallace said, because a vertical lift fabric door is partitioned, it’s the easiest door to accommodate the tail slot. 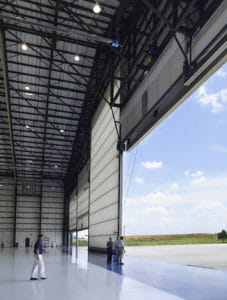 When open, vertical lift fabric doors use no floor space. Unlike rolling steel doors, when the hangar openings are uncovered, the door occupies no floor space because it’s suspended from framing above the door opening. This gives owners more operations flexibility.

“We designed a hangar for United Airlines in Houston,” McNayr said. “In that climate they only get maybe two or three months in the winter where they need to close the door, and the 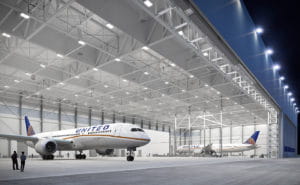 rest of the year they leave the doors wide open for ventilation. For them, it was an advantage to have a vertical lift fabric door that completely pulled up out of the way, so they had the full width and height of that big opening to leave open eight months out of the year. If they had sliding doors, every day they would be moving those doors back and forth to get aircraft in and out.”

Between the two most common hangar door options, FSB advises clients that cost is comparable – though the vertical lift door itself is less expensive, the additional steel that structural engineers must include to account for the added weight balances out the expense.

“We tell clients it’s about a wash in terms of cost,” Timbrook said.

FSB brings cross-discipline aviation expertise to every project
FSB’s hangar design process is consistent with the firm’s multi-discipline approach. Architects and structural engineers work closely with the owner to select the right doors for the project. The door decision also impacts mechanical and electrical engineering design. With these disciplines under one roof, FSB clients have come to expect a seamless, carefully considered and coordinated final product.

“Mechanical might review a design and can say, ‘If you pick the rolling steel doors for this particular hangar I might need to make the heating and cooling units bigger, which will require more space. Are you willing to live with that?’” Wallace said.  “It’s easier to coordinate when we’re all in one office.”

For a decision that is both literally big, and makes a big impact on how hangars will be used, clients appreciate the combination of aviation expertise and cross discipline approach the FSB team brings to every project.

Interested in learning more from the aircraft maintenance facility experts, contact Philip McNayr, Aviation Market Principal, at aviation@fsb-ae.com or call him directly at 405.840.2931.