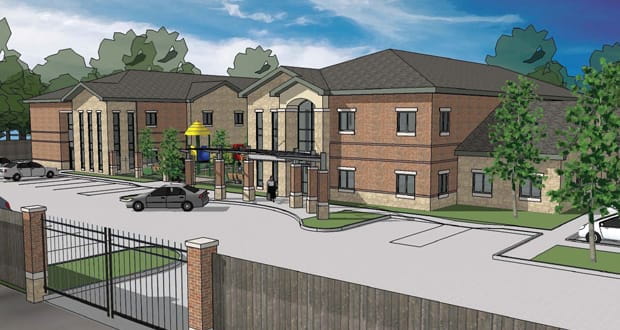 OKLAHOMA CITY – Providing women with a safe place away from insecure homes is the YWCA Oklahoma City’s primary goal. The YWCA Oklahoma City is the only certified battered women’s shelter in Oklahoma County. With only 55 beds, women and children in need of shelter have been known to sleep in the chapel or on rollout beds. The organization needs more space in order to fulfill its mission.

To better serve women, it conducted a $15 million capital campaign with plans to build a new emergency shelter and renovate the existing one. The campaign was led by women who headed the 1986 effort to build the existing campus. As part of the capital campaign, the entire YWCA campus will be fenced in and security cameras added.

The 27,000-square-foot Thelma E. Gaylord Emergency Shelter was started Dec. 18, 2013, and is expected to be complete in spring 2015. It was designed by Frankfurt Short Bruza Project Architect Cathleen Guthery and is being built by Lippert Brothers Inc. YWCA Chief Support Services Officer Deb Stanaland said when both companies responded to requests for qualified proposals, they showed they were capable of the jobs and believed in the YWCA’s mission.

“(Their beliefs in us) set them far above other companies,” Stanaland said.

Guthery said the project was a challenge because the YWCA wants women to feel safe and secure at the shelter, yet they don’t want cinder-block walls and barred windows.

“The challenge was to not make it institutional when you’re making it safe and secure,” she said.

She was happy to meet the challenge, however, because the project means a lot to FSB.

“The cause is really important to us,” she said.

The shelter will have 35 bedrooms, with four beds in each room. Its bed count will be 140. Each bedroom has its own bathroom. Mothers and children stay together and don’t share a room with others. Stanaland said the organization will likely not use all the beds at one time.

The two-floor facility’s exterior will have brick-and-stone veneer. The interior will be painted stone walls, with other warm, nature-colored accents throughout the building. The bedrooms will have woodlike laminate flooring, while carpet will line the offices and common rooms.

When people enter the facility, they will be immediately met with the welcome center and main admission area. In the same corridor is where the hotlines are answered, including the statewide domestic abuse hotline. The first floor also has some bedrooms, a business center, a media and television room, laundry facilities, a teen room, a children’s room, meeting spaces, and a kitchen. Breakfast is served continental style, but lunch and dinner are prepared daily.

The upstairs has more bedrooms, a meditation space, medical clinic, and television-free game room. Community Health Centers Inc.’s Healing Hands provides medical services and prescriptions. A forensic nurse will issue domestic violence exams in the exam room. Sexual assault exams will sometimes be performed, but they are usually conducted at a hospital.

“We want it to be when someone comes to us they’ll know that the place is safe,” she said.